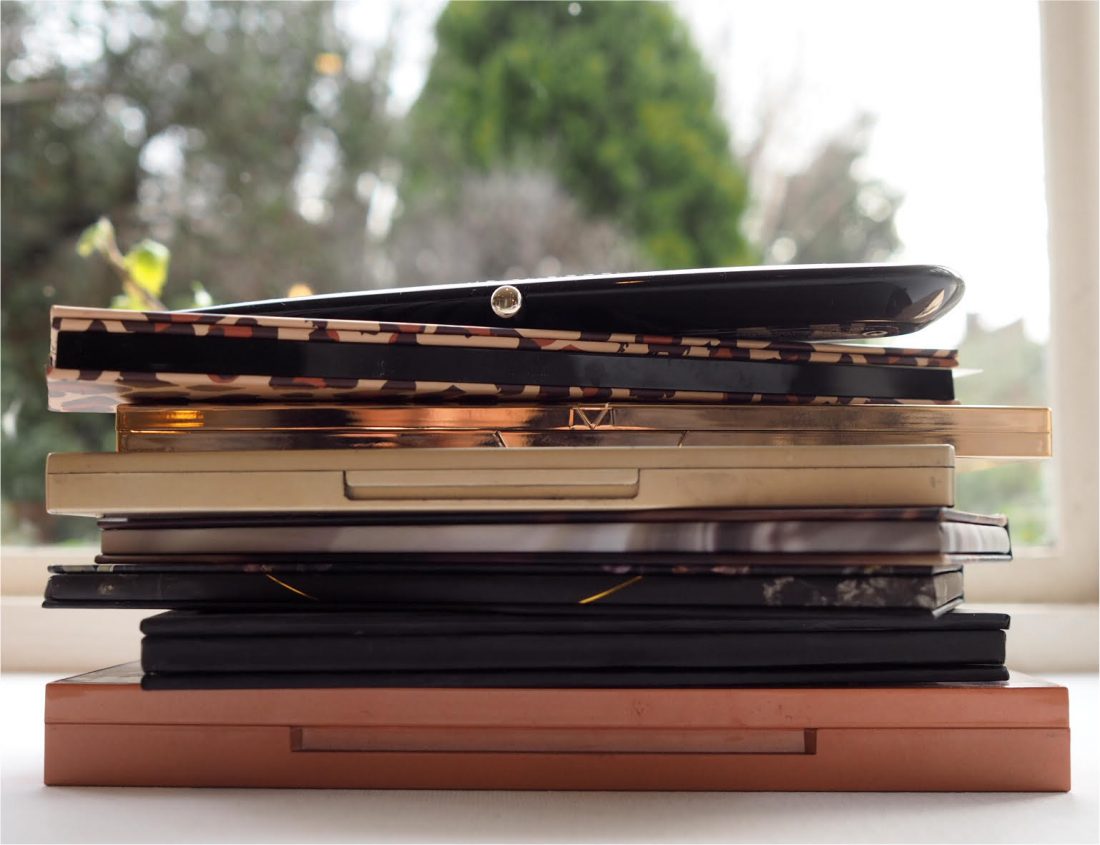 I keep a stack of palettes next to my make up mirror – they’re not tidy or neatly organised or even particularly well kept, but they’re the ones that I’ve hung onto and used regularly since I got them. I offload a lot of my make up to friends and family (they’re required to put some money in the next charity pot they pass as a trade) so the palettes I’ve kept are those that I just couldn’t bear to get rid of.

As you can see, I haven’t tidied them up for this post – you might as well see them well used. I’ve also pulled out the most used shade from each one and swatched them in a row to see what kind of a palette they’d make if I put them all together! First up is Marc Jacobs Scandalust (£39 HERE) with most used second along, At The Office.

Next is the limited edition MAC Mischief Minx, with the second along golden shade, V. Frisky (silly name) as the one I’ve dipped into the most. It’s a warm gold so it’s great for inner eyelid or just whispered over the top of a dark shade to give it extra dimension. It’s £32 but out of stock on the MAC site so I guess I’m not the only one liked it, but I’ve found it HERE (with a free make up bag included).

I think you can probably tell how often Fortune get used by the state of it! I actually do have another one open but I’m trying to use up some of the shades that I didn’t dip into as often. So, as you can see the one I’ve used the very most is the first shade, Glimmer. But second and third are Hope and Yes Please – I can’t tell which is the next *most* used so I’ve included both. Hope is a soft, sheeny brown and Yes Please is khaki. It’s £9.99 HERE. I can’t believe that the palette I created with Makeup Revolution is still going so strong.

I’ve loved using this palette – it’s divided up into ‘looks’ but I haven’t followed that format. I love the middle shade of Date Eye but actually have also used the middle shade of Disco Eye a lot, too. It’s £60 and currently sold out (I saw that House of Fraser had it reduced to £45 so they may have it in stores at that price).

I’ve hung onto several Zoeva palettes this year, but latterly, this Opulence is my most used with shade Imperial. Especially shade Get Your Glory in that wine red colour which just looks incredibly striking with some black kohl and mascara. I like the ratio of dramatic colours to more gentle and wearable ones – it just gives you the option to say to yourself, go on then, give that blue a go! It’s £18 HERE.

Because this contains an excellent khaki shade, Dubai, I’ve opened it up far more than I should for a brand that doesn’t apparently want to appear on BBB because it’s not er, cool enough. We’re not Huda’s dream customers so really, I shouldn’t give it an airing at all. But, I can’t lie, I’ve used it and used it as you can see. Maneater is epic for a red inspired eye (I was going to say wine eye but that doesn’t sound good!) but I’ve dipped into Rose Gold, Fling and Trust Fund as foil toppers. It’s £56 HERE.

The Urban Decay Heat Palette took the sunset eye look next level during the summer. I carried this palette around in my bag because I wanted friends to see just how amazing they’d look with orange eyes. I can’t tell you how great this is and it suited everyone without fail. My most used colour is Lumbre, followed by Dirty Talk, but I’ve dipped into most of the matte shades, too. It’s HERE (normal price £39 but FU has it with 10% off making it £35.55).

So, this is what the palette, made from all my favourite shades from other palettes, would look like! Hmm.. I don’t know. I definitely need a darker shade in there so I’d pull out the very last shade from the Charlotte Tilbury palette, I think. Otherwise, it’s At The Office Marc J), V. Frisky (MAC), Date Eye (CT),  Imperial (Zoeva), Hope, Yes Please (both Fortune) Rose Gold (Huda) and Lumbre (Naked Heat).