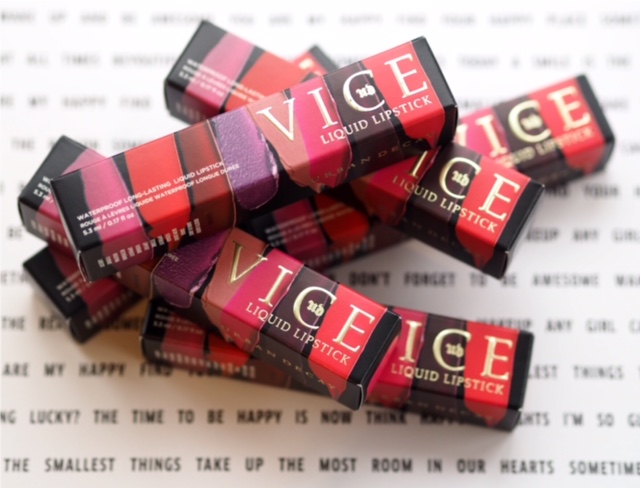 Although I previously had a few lab samples of the Urban Decay Vice Liquid Lipsticks, I’ve now got a more comprehensive selection to show you. Split into two finishes – Metallized and Comfort Matte – they’ve now launched in the UK HERE. In the line up above – please discount the first shade (it’s a Metallized and I didn’t realise until I took the swatch off and saw glitter!) – we have in Comfort Matte: Menace, 1995, ZZ, 714, Tryst and Backtalk. I’ve been wearing Backtalk all morning and it has not shifted an inch and nor does it feel dry – formula wise, these are top of their game for mattes.

Again, ignoring the red shade, it’s the same line up in the swatches (bottom to top).

The next swatches coming up are the Metalized. In the line up here it’s Trap Queen, Studded, Purgatory, Amulet, Big Bang and Time.

And the same again from bottom to top. Urban Decay  has locked down a formula for these that ensures that the shimmer ‘floats’ to the top of the colour.

I’ve done this one, Firebird, on its own because in the tube it seems shade shifty, which is what UD is so well known for in their make up construction. It translates to a fuschia shade with no shift though, and it’s described on Temptalia as a satin finish… which isn’t either Metalized or Matte. Even though I have it in my hand and have swatched on my arm, it’s really hard to tell exactly the finish.

I noticed that Urban Decay (UK) doesn’t put the finish next to the colour names when you’re trying to buy which is confusing, but I also notice that lots of the shades have sold out already so it doesn’t seem to have put anyone off. So, upshot is that this does seem to be the benchmark formula – usually with a matte wear (because I’m not a fan), I can’t wait to get it off my lips and only test for the minimum time for endurance and colour last, I barely notice this is there. They’re £15.50 each.