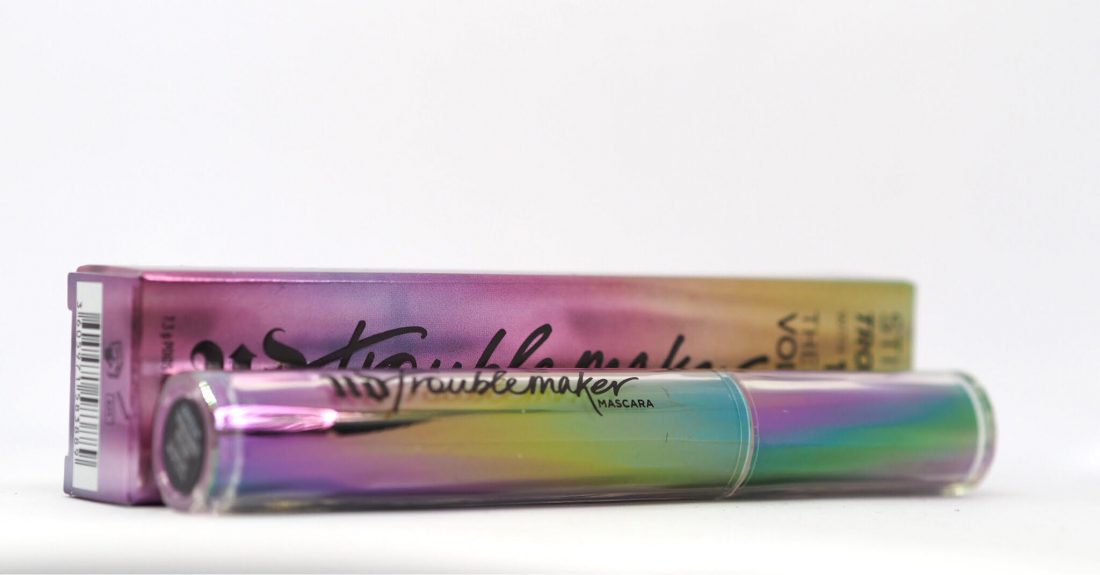 With stiff competition from the High Street, Urban Decay’s newest mascara, Troublemaker, is apparently, er, sex proof. Now, I like a thoroughly tested product as much as the next person, but nobody needs that kind of overshare so I think the best I can say is that it’s a heavy-duty, last (nearly) all day kind of formula that doesn’t really change in nature through the course of the wear. What you put on at the beginning is more or less what you still have at the end – of whatever you’re doing!

It’s a better than average mascara, without being the best ever mascara, but it can take the prettiest mascara prize very easily with the holographic tube. I love it! So, the composition is silica and fibres (I didn’t even notice them, they’re so fine) and two types of black pigment to get the most intense black shade for lashes. In terms of volumizing, I’d say that it made my lashes fatter before it made them longer, and one coat doesn’t do much – you need to take it two a minimum of two coats. While it looks quite heavy on the lashes, it feels very light without making hard, crispy lashes: they stayed completely soft throughout the wear. The claim of 13.7 x lash volume doesn’t seem that exciting to me – I mean if it was a 50% longer/fatter improvement, that would be something to talk about! But, 13.7? Not really!

When it comes to the brush, it’s got little ‘grabby’ spikes that in theory attach to your lovely long lashes and glide mascara through them. If you have exceptionally long lashes, you might have some hope of grab, but mainly on me, the brush just coated lashes rather than being a brush through experience. A lot of the claims on the Urban Decay Troublemaker Mascara are more hopeful than factual I think..! I noticed by end of play that I had some light smudging under one eye, but at the same time, I know that I was rubbing my eyes a lot so I might have put it through more than might reasonably be expected.

It’s pretty clear that this is Urban Decay’s contender to Too Faced Better Than Sex – it’s prettier for sure, but I’m not sure it’s winning the race. You can find it HERE for £19.50.