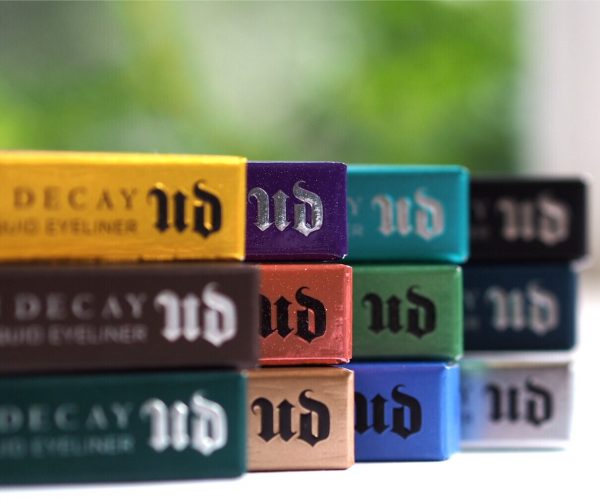 So, the Urban Decay Razor Sharp Eyeliners have already had their share of controversy – you might have seen it bubbling up on the internets. The cause of the drama is that some people objected to the name and the swatch (too close to the wrist for something called razor) and felt it promoted self harm. I have to say that while I will stand for anyone’s right to take a view on this and that self harm encouragement is rife on the internet and only to be discouraged, I really didn’t see it that way at all. However, my swatches are nowhere near the wrist for that reason.

The Urban Decay Razor Sharp Eyeliners are a mix of standard and metallic liquid liners with a very fine point brush. I have to say that while I was photographing and swatching I got them the wrong way up repeatedly – the coloured section of the product is the lid while the bottom (that looks like the lid) is actually the well of ink. Don’t get caught out like I did with liquid liner splattered all over your kitchen!

I found a big difference in performance between the non-metallics and the metallics – the former took ages to set and felt far too liquid for any control, while the latter dry more quickly and because the product is fractionally thicker, are easier to apply. But, even some of the metallics are a bit too loose (and I did shake all of them first).

From bottom to top: Retrograde, Chaos (non metallic), Rush (non metallic), Goldrush, Perversion (non metallic), Neptune and Kush. I think you can see where the problems are. It’s so weird that this is such a mixed bag – the metallics stay put and go on evenly and yet the others are the opposite! I think you either need to be very practiced with this kind of wet liner or you choose very carefully.

I’ve done some double checking on reviews around the internet and there does in many cases seem to be a ‘too wet’ issue. While I absolutely love the colours and the intensity of the metallics, I’d give the others a miss on the grounds that they’re just too hard to use. They’re £16 each HERE.