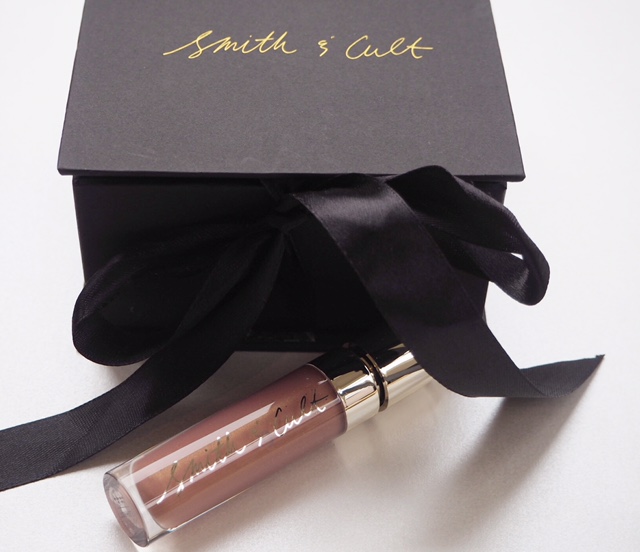 This is one happy gloss day! I’ve already investigated Smith & Cult nail polish some time back, and was hoping the brand would branch out into a few other products. There are 10 initial shades for Smith & Cult The Shining Lip Lacquer – and they’re vegan and gluten free (although, to be fair, I imagine most lip glosses are gluten free) with a very high shine.

The range of colours that I’ve been sent is beautiful – not one that isn’t totally wearable. They have that Stila milkiness and a formula that’s not sticky but I would describe it as tacky – nothing like a lip oil that has no tack at all; these definitely have it. I know lots of readers don’t like that feel in a gloss but it doesn’t bother me at all.. and a little bit of tack has the advantage of making the gloss last longer.

Shades from bottom to top are: The Warning (with gold micro shimmer), The Lovers (a milky coral/pink), Life In Photographs (baby pink/nude) and Flesh Riot (nude with golden micro shimmer).

They’re said to be lightly volumising but I haven’t noticed that effect but do like the idea of coconut essence, which is one of their ingredients. The formula doesn’t taste or smell of coconut – more is the pity because I love it, there is more of a faint vanilla hit.

I think they’re slightly on the pricy side at between £20 and £22.60 (which is so ODD.. I have no idea why one costs more than another) but if you’re a glossy gal, they’re definitely worth a try. You can find them HERE.