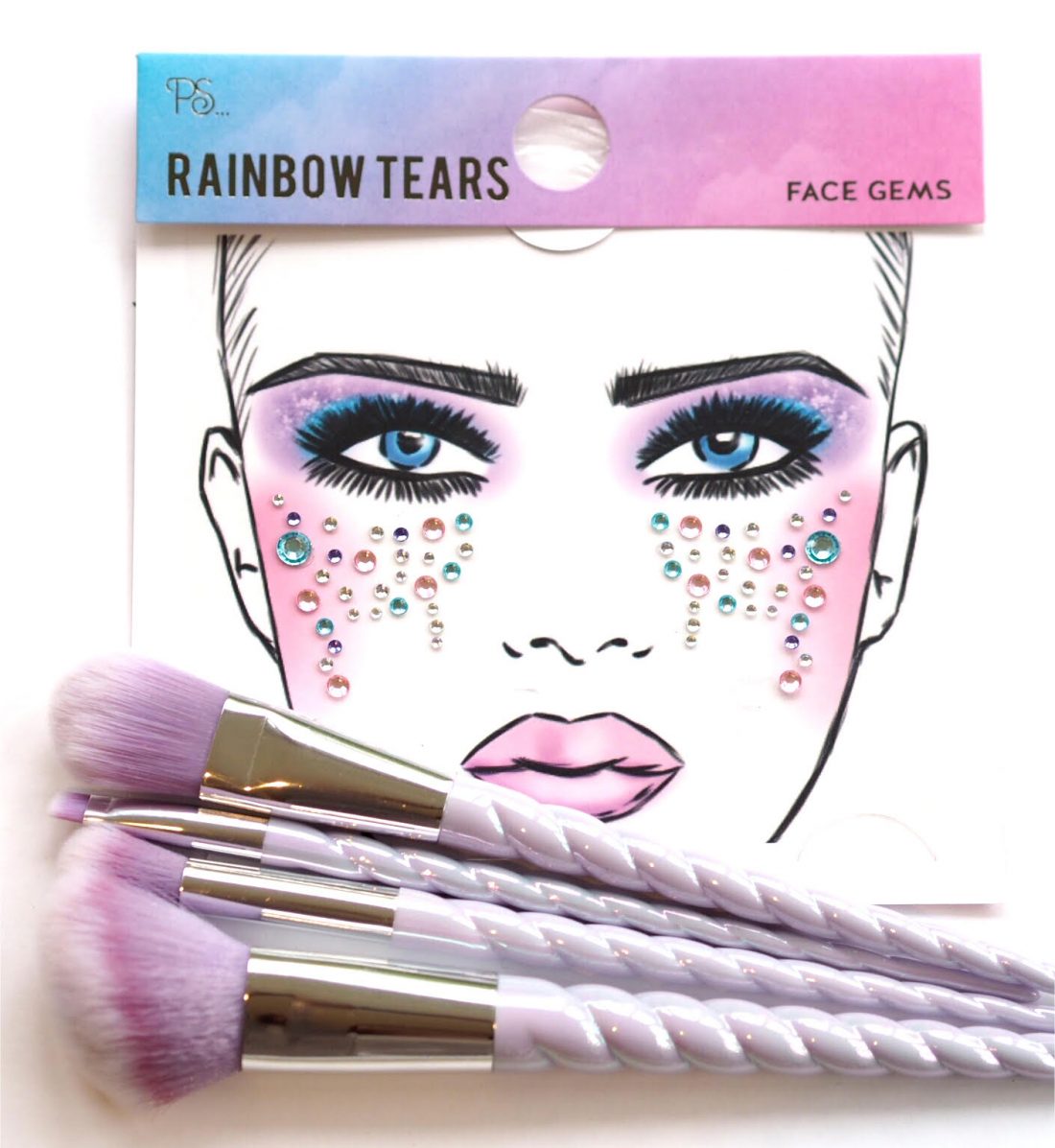 I feel we’re on the edge of the ‘unicorn’ trend being over but Primark are giving it one massive rinse before it goes! Rainbow Tears is an inspired name for face sparkles – there is some incredible creativity going on behind the sceneswith PS even if the quality isn’t always there in the outcome. You could easily say that it’s a festival look that you’ll probably only wear a few times so it makes no sense to pay big money for it and I’m on that side. These aren’t high quality products but if you want to rainbow your face, they’ll do.

Kicking off with the Holo Nail polishes (which are actually duochromes) and the Nail Gem polishes – I try and steer clear of any glitter polish because it’s just so hard to take off (you need Essie Leave No Trace Glitter Remover, ideally, £5.99 HERE) but duo is easier because the refractive particles are smaller. These do give a spectacular holo effect but are probably better used as a top coat over another colour. You need at least three coats to get a full nail cover. I don’t have prices for everything but I’m pretty sure these are £2 each.

Funnily enough, my biggest recommendation from the rainbow collection is the gloss in Silver Ice and Candy Floss Pink at £1.50. It’s just like any gloss but with a really good level of iridescence.

As you can see in the swatch, the lipsticks have that blue shade shift tone but they’re not particularly well pigmented. Maybe they’re not supposed to be – it’s hard to know.

These are called Pixie Kisses – I told you, Primark are going all in!

My next recommendation is the Holographic Highlighter (£3 I think) – it’s a big chunk of iridescent sheen that’s pretty flexible in use – legs, arms, face or er, anywhere else! It needs a light touch on appliction otherwise the product buckles and needs further blending. The Sparkle Eyes (£2) liquid eye liners I found to be a bit watery.

It’s swatched above along side the Hair Crayons (don’t bother) – one snapped immediately and they’re somehow dry and oily at the same time!

The swatch here is of the Liquid Liners and the Mermaid Hair Glitter Kit (£3). I haven’t tested it – I don’t think my postman is ready to greet sparkly hair at 8.30am.

The Unicorn Brush Set in the main picture is very sweet – you aren’t getting the world’s best brushes with this but I think they’re adequate at £12. Finally, the Rainbow Tears face sequins are £1.50. As Primark has no website, I can’t direct you anywhere. I have one or two other products that I’ll show in a later post, but for short term affordable ‘rainbow and unicorn’ looks, it’s mostly okay.