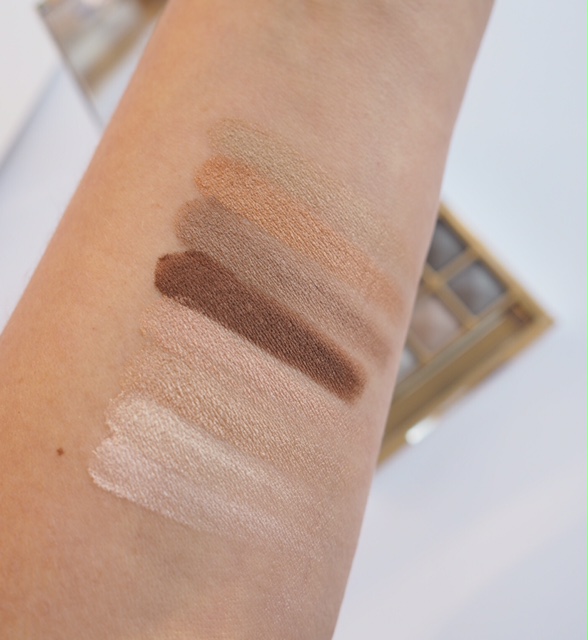 For £15, the M&S Autograph Eye Shadow Palette (with 16 colours) is pretty good value. I’m quite keen on low commitment colour selections both in terms of pricing and amount. We all have certain shades we use more than others but when a palette presents with smaller sizes, it doesn’t feel quite so important that everything gets used up.

The first eight shades focus on pale but warm shades, including several ‘nude’ background shades, moving through to gold and brown hues. I have to say that in swatching, I found the formula inconsistent – mixed textures (mattes, sheens, metallics) does naturally have swatching variations, but the second eight swatched much better than the first across the board.

In this second eight, the shades are better pigmented – there is no reason to think that the shades were made in different places (which can happen) as the labelling says it was all made in China. That said, with very light shades, it’s not so important that the product delivers consistently on one swipe – you’re going to be blending it in well so that is just a very minor niggle. The second eight shades are cooler toned (pop that peachy shade on blue eyes!) with some grey smoky looks just waiting to happen. It seems like a weird choice to put warm and cool together but we’re not so bound by those rules any more I don’t think.

I still think this is £15 well spent to add to a shade palette you might not have much of. The palette isn’t listing yet on-line but should appear in the next few weeks.