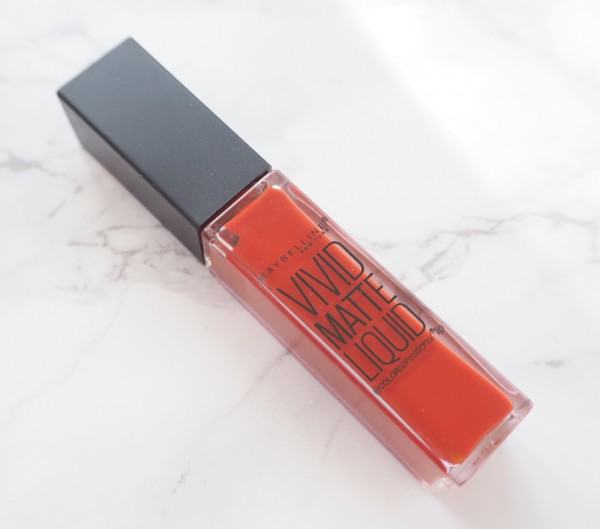 Maybelline Vivid Matte Liquid is another of Mr BBB’s purchases. For a man who is used to finding lashes on bananas as standard in our kitchen, he still rather struggles. I had a stressed phone call from a New York Sephora where he had checked off everything on the list, except ‘Facial Cleanser’ so he’d gathered up everything that said ‘facial cleanser’ and taken a picture to ask which one I wanted. In fact, I’d written Too Cool for School Egg Mousse Facial Cleanser but he’d assumed that was two things and not one. So, he had to go and put them all back. More curious is how he managed to take a photo of anything in Sephora because when I’ve tried, security leaps out of nowhere to shout no! Anyway, he found the Maybelline Vivid Matte Liquid in Duane Reade.

Anyway, as you can see the ‘vivid’ part of the description is not wrong! This is super bright (it’s No.30 Orange Show) and gives complete and intense lip coverage.

The texture is incredibly light for a matte product – it’s another lip glider although you do need to be very accurate when you first apply because there’s a strong ‘stainy’ element and mistakes, unless recified very quickly, are more difficult to rectify. I don’t like matte coverage on myself, but I have to say, this doesn’t feel like any kind of matte I’ve tried before. It actually feels like a balm – it’s slightly over scented for my taste – but I think Maybelline Vivid Matte Liquid is going to take on every existing matte lipstick and knock it out of the park.

Maybelline Vivid Matte Liquid will launch around May time in the UK for £6.99. It’s one to watch for a sell-out. I’ve got some UK shade samples on the way so I’ll let you see them as soon as I get them.