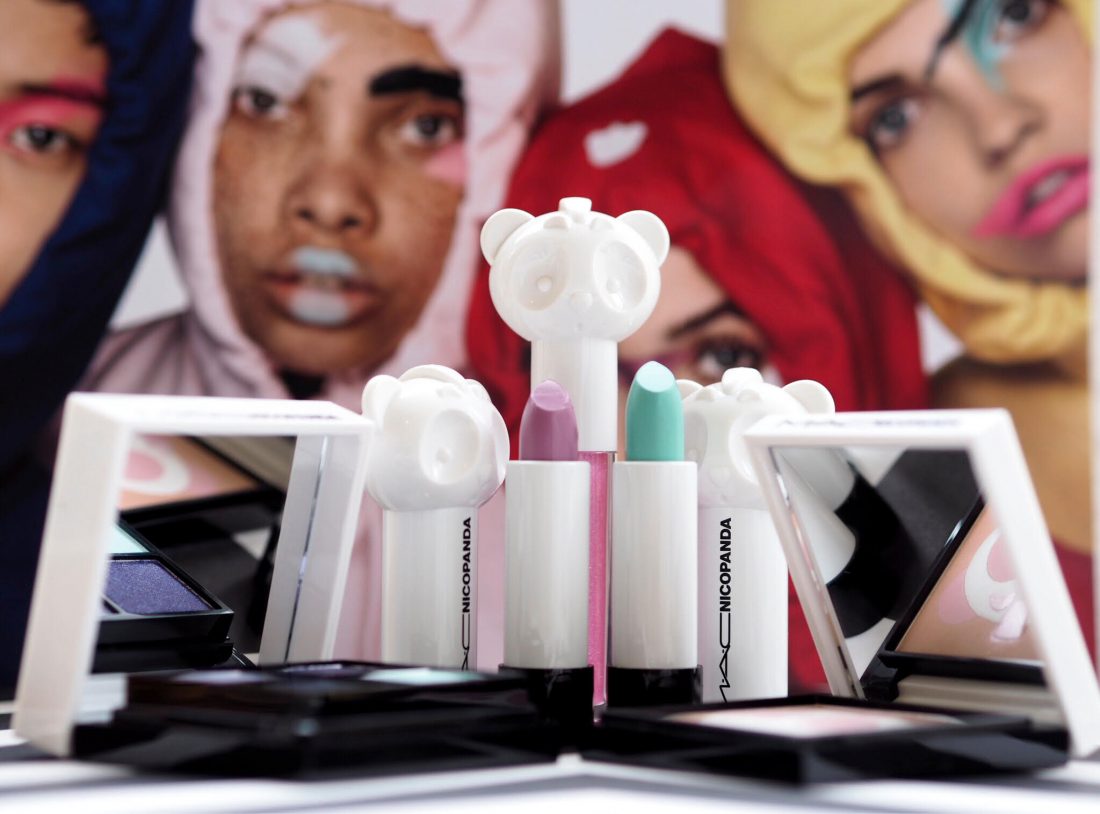 In the back of my mind, I always had NICOPANDA down as an Asian brand – it’s certainly Asian inspired, but its roots lie in New York. Founded by Nicola Formichetti (and his brother Andrea), NICOPANDA was an immediate success at launch in 2015 with both accessories and apparel taking a playful approach to fashion. If the name Nicola Formichetti sounds familiar, it should: he has been creative director at Mugler, creative fashion director at Uniqlo and artistic director at Diesel. Safe to say that it’s a brand that appeals to those that like edgy and quirky styles. If you’re looking for Boden, you’re not going to find it here. You need to get your head around the concept of panda punk.. kawaii meets avant guarde. Actually, Formichetti says that the brand is so named because it was his nickname when he was younger.

It’s a huge collection, with a panda face brush bag, panda topped brushes, stickers, false lashes – all the things that smaller collections with MAC usually don’t bother with to any great degree.

I’ll kick off with the two lipsticks that I have here, Kawaii Party (lavender) and Galactic Mint. These are in a matte coverage, alongside four other shades ranging from a baby pink to a deep navy/black. They’re £19.50 each.

Next up is the Lipglass in Panda Kiss, a kind of hyper pink filled with pearly shimmer. There are three other lipglasses, including Dreamz in a navy/black shade. They’re £17 each.

And here they are swatched. The collection, by the way, launches on 15th March.

I’ll say ahead that I haven’t swatched the Gleamer Face Powder yet – I need to look at it a while longer, but this one is in Colour Me Nico in Nude. I’ll also tell you that the Full Face Kit had me completely perplexed because underneath the eyeshadow quad lies a blush that I just couldn’t open – I felt like I was doing one of those Chinese puzzles where you have to pull certain drawers and push levers. I convinced myself that because these are samples, mine probably didn’t work and I didn’t actually get it to work til I sat down to explain how impossible it was! So there’s a lone swatch of the blush right at the end of the post. This one (of three) is called Preppy Panda (£35) in lavender, navy blue, royal blue and pastel green. I have no idea how to wear it yet!

I know the Harajuku Blu dark purple with pearl will make it onto my lids though and I’m really tempted by the Panda Riot shade in navy with violet and blue pearl, but I don’t think it’s an easy wear by any means and requires some playing about. The other shade names are Atonic Blush (green) and Otaku (pastel lavender).

The (finally discovered) blush shade is Unicorn Dust or Rust in a pearly pink/lavender shade.

And, here’s the swatch, complete with goosebumps! So, do you covet anything from the collection or is it really far away from what you want to see from MAC?