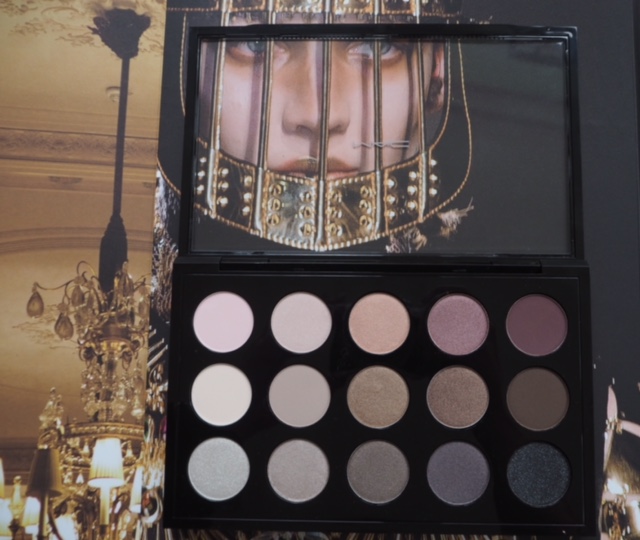 It’s not often that I have the opportunity to look at MAC Palettes unless they’re part of a limited edition range. It looks to me a though the new Eyes On MAC palettes will be permanent as they’re not marked limited. I’ve been given the MAC Eyes x 15 Cool Neutral Palette to put through its paces and it’s a mixed result.

My natural palette I think would be the Warm Neutral, but nonetheless there are some shades in the cool version that I’d easily use over and over. So, from bottom to top: Flouce (matte), Sweet Allure (satin), Sun Tweaked (frost), After Dusk (veluxe pearl) and Blackberry (matte).

So, the first thing about the MAC Eyes x 15 Cool Neutral Palette is that there are plenty of different finishes and textures to be had from one palette – if you love to sit down in front of the mirror and play with colour nuance, then it’s got everything you could want. On the other hand, I think I’ve seen all these shades before and it’s just a little too neutral for my preferences – you have to really work for the colour on some of the textures. And, when it comes to textures, this just doesn’t feel like a £65 eye palette, to my mind. The shades kicked up a lot of drop – if it didn’t have MAC written all over it, I wouldn’t put it as that brand, having used many, many of their shadows over the years. It’s a little dusty. I got much better pick up using my fingertips than I did a brush, I might add, and I might have been better to swatch with a sponge tip applicator.

I think the right applicator is key here, but I don’t really know what to advise – I tend to use a little Revlon brush for swatching because it gives good pick up and a clean line, but I had to go over several shades again, purely so they’d show up on my arm.

The MAC Eyes x 15 Cool Neutral Palette might well be for die-hard MAC fans only, I think, and make-up artists or the super skilled who can work it to its full ability. It’s £65 HERE, along with the Warm Palette.