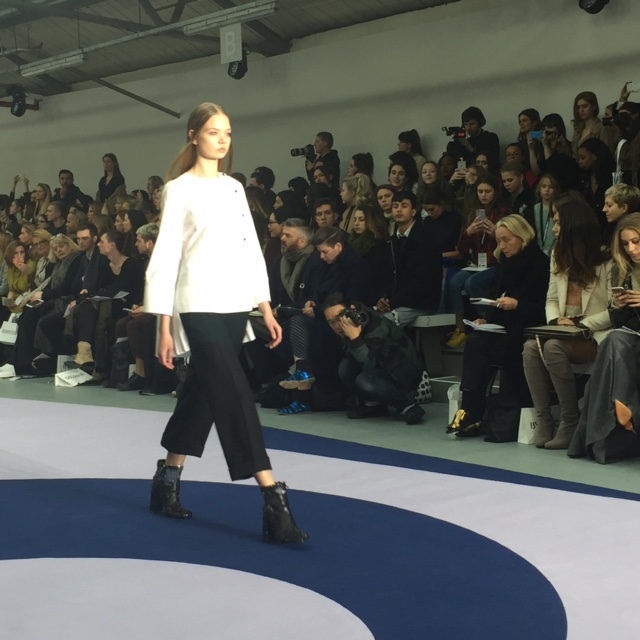 I’m going to confess that when I got backstage today to watch the make up and find out the inspirations for the Eudon Choi I was a bit disappointed because it was such a pared back look. In other words, not much to see.

The look was a MAC take on the morning after the best night of your life; so smooth, balmy, fresh skin, lips dotted with tinted balm for a juicy but natural look and base-coat only nails. All of the statement of the look was in the lashes which were pinched with tweezers or fingers to create clumpy spikes (we need to remember that it’s a runway look, not real life!). It was really, other than the lashes, a very minimal make up look. But, once pared with the Eudon Choi clothes, it really, really worked. The whole look just fitted so nicely with what was being presented.

The look was created by Adam de Cruz who often does the Eudon Choi shows and just kind of ‘gets it’. As you can see from the pictures, backstage was absolutely rammed – more than usual I think – and for the first time ever at LFW I ran out of time to get all the pictures I needed.

What I did get to do was have a sneaky peek of forthcoming products. MAC actually really does put products in the hands of their artists to test before they ever come to market – if you remember from the last MAC backstage I did, artists were testing out different shades of strobe cream and those won’t launch til Autumn this year. As it turns out, the artists loved all of them, so there are four new shades of strobe heading our way – it was impossible to choose one over another. The two lipsticks above are from the MAC Autumn look – I don’t have any other details on that collection yet but these are definitely coming (it’s a big collection so this is just a taster). And yes, that lipstick does have a splash of lime but swatches more of a gold shade! There’s a big trend ahead for A/W for golds and metallics.

And these are some of the MAC Autumn look eye colours – plus a rather juicy looking cheek/lip combo.

I love this shade – I can’t wait to get it on my cheeks!

These are MAC Quik Trik Sticks – currently being trialled by artists (so they may never arrive in store if they’re not popular with the artists) and that’s a working name only at this stage.

I did manage a sneaky swatch of these and they’re butter soft.

So one end is shimmer free and the other end has a contrasting shimmer element. I thought they were gorgeous – like a blush stick – so fingers crossed that we’ll eventually see them.

This is the product that everyone was crazy for – the MAC Mineralize Pin Wheel. Again, it’s out on test but judging by how much everyone absolutely loved it, there’s a high possibility that it will appear as a retail product.

Finally, these two super-juicy lipsticks – they feel similar to the forthcoming Bobbi Brown oil infused lipsticks, but it’s such a sneaky peek when – or if – they’re coming out. The working names are Candy Wrapped and Side Dish.

It’s these glimpses of what’s ahead that I find the most exciting thing about being backstage – it doesn’t matter that they’re not in perfect condition or they don’t even have names yet because they’re a peep into the future. These are the products that will live or die by their performance back stage when they’re under lights and working hard – if they’re not up to the job, they simply never happen. Oh, and finally, the other product that the artist absolutely loved is Next To Nothing foundation – an ultra bare skin base.