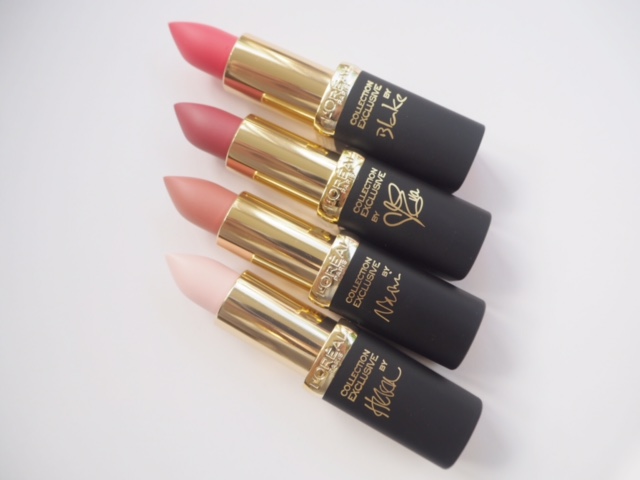 L’Oreal Paris’s idea of matching lipsticks to their spokesmodels is such a good one – they’ve got all tones covered off so if you are a similar skin colouring to any of the models, you’ll know at a glance which lipstick from the L’Oreal Paris La Vie En Rose collection will suit you best. There are five new shades in the La Vie En Rose collection, and just like the previous collections (Reds and Nudes) of Color Riche, I think they’ll be very popular. I’m missing one shade here (Liya).

The first shade in the swatch is Blake, next is Eva, then Naomi and finally Helen. Unless you’re really up on your spokesmodels, then it’s a little confusing to know who Helen is – is it Helen Mirren, who doesn’t appear on any of the promos for this? I don’t know! What I do know is that it’s pale as anything and I’m struggling to know who this would look good on other than the mysterious Helen! Although the shades look matte in the bullet, they’re not – there’s a low sheen to them and I detected some frosting in Helen and Naomi. Helen is described as an iridescent nude pink for fair tones, Naomi is a mauve toned ‘tea’ pink, again for fair tones. Blake is described as an orange pink for fair tones, Eva is a peach pink for warmer tones and Liya (which will be a Superdrug exclusive) is described as a Grenadian pink for deep tones.

The official launch for L’Oreal Paris La Vie En Rose is October, but as ever, Boots have gone ahead anyway and you can find them here for £6.99.