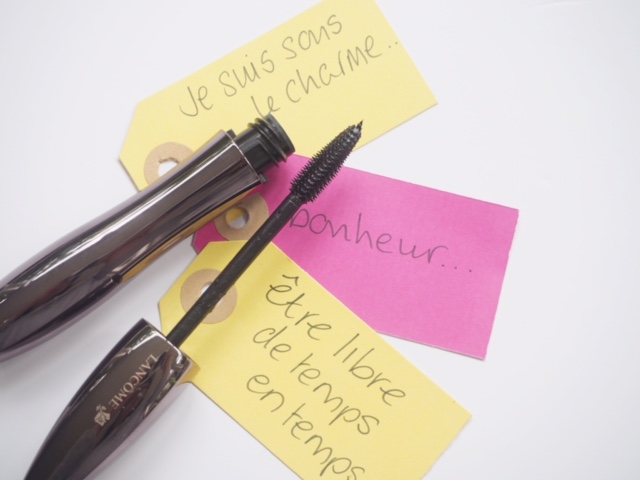 I’m still at the over-excitable stage when it comes to mascaras after years of lash extensions. My two absolute go-to’s are the Clinique Black Honey (several back ups in place) and Chanel Le Volume which might actually be just a little too volumising for me. It’s a strange concept to even wonder about whether certain mascaras suit you or not – but I’m finding that I don’t really want to do excessive lashes any more – I’m really happy with long, black and spiky (although I will not be able to resist having a go at the new Maybelline Chaotic, designed exactly for messy lashes).

The Lancome Hypnose Volume-a-Porter is an absolute gem of a mascara for anyone who prefers a tidier approach but still wants longer and more defined lashes. It’s extremely light weight (while Chanel is not), and doesn’t do that stiffness thing that makes your lashes look and feel brittle. My lashes have stayed soft while wearing it – not as soft as with no mascara, but it’s pretty impressive that I can feel nothing at all. If you’re interested in the formula, it’s 20% latex and what accounts for the softness is a reduction in wax.

If you’ve read BBB for a while you know that a French press release is always a thing of humour – for some reason, French brands always have to describe the woman that the product is for. So, let’s just say she is never a harrassed mum of three in an enternal loop between Tescos and potty training. On this occasion, it’s for the women who, when ‘she asks for a baguette, she is deadly serious…’. I know. I don’t even know what to say. But that aside, if you’ve no plans for the messy look and if you are beginning to think that XXL lashes aren’t really your thing any more, Lancome Hypnose Volume-a-Porter should definitely be on your shopping list. The bonus of a French release is that they do often find words to describe beauty that you wish you’d thought of – in this case they talk about lashes being ‘dressed’ which sums it up nicely, as does a formula described as ‘daytime volume’ (definitely going to use that one again). If you like ‘dressed’ lashes, snap it up – it’s gone straight into my keep drawer.

It’s also worth mentioning that if your lashes are on the weak side, Lancome’s formulation uses rose cells for better resistance, and for no reason that I can fathom, it’s also rose scented.

Lancome Hypnose Volume-a-Porter launches officially on 1st August for £22.50, but I’ve found it on Selfridges.com HERE if you can’t wait.