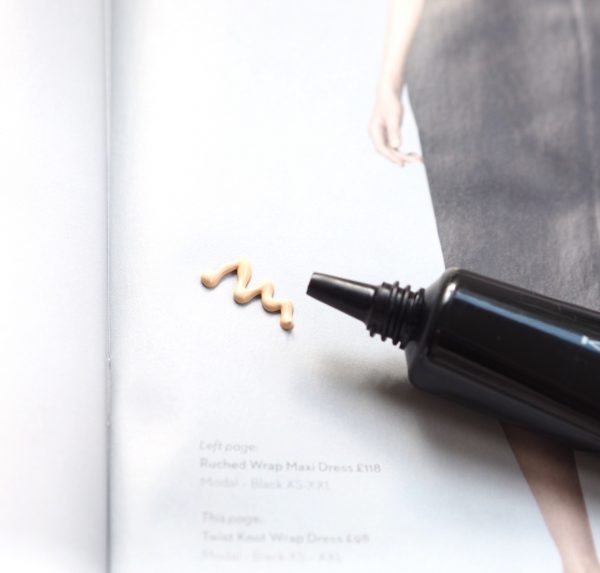 I nearly didn’t post about Kate Quick Remake Liquid at all because it’s hard to explain. Generally, I don’t touch up my foundation during the day – if I did long, long days where major last was essential, I would, but because I work from home, it’s very rare that I need a makeup look to go above and beyond and last perfectly for a solid 8 hours or beyond. And, truthfully, I’m not that bothered if wears off!

However, the concept of touching up your foundation, with something other than, er, your foundation, seems to have really taken off in Japan and Korea. You would use Kate Quick Remake Liquid to blend over faded patches of base to revitalize it and give your skin the covered look back. Bizarrely, it’s only in one colour – a light shade seen in the main picture, but somehow, it does – kind of – boost the look of coverage. It’s not for the whole face – only the small patches (usually forehead or below the eyes at the top of the cheeks) where you know you’re more likely to lose your cover. It’s not a concealer as such – it has a luminosity to it though (despite the fact I thought it had a mattifying effect so you could easily use to spot-mattify) and I think you could double it as under eye coverage – but for someone not obsessed with the perfection of an all day last, I can’t quite get it to make sense!

Kate Quick Remake Liquid has the benefit of SPF25 so if you use it to fix your foundation fade you are at least replacing the SPF which may have worn off with your makeup. You can find it on Ebay for around £10-11, and although I’ve checked several of the Korean/Japanese sites that ship to the UK this product is so popular it sells out very quickly. I’m not massively an advocate of buying beauty from Ebay but I’ve had to buy a few things recently because there is simply no other way to get hold of particular products in the UK and they’ve all been perfect. This particular item was given to me by a friend.