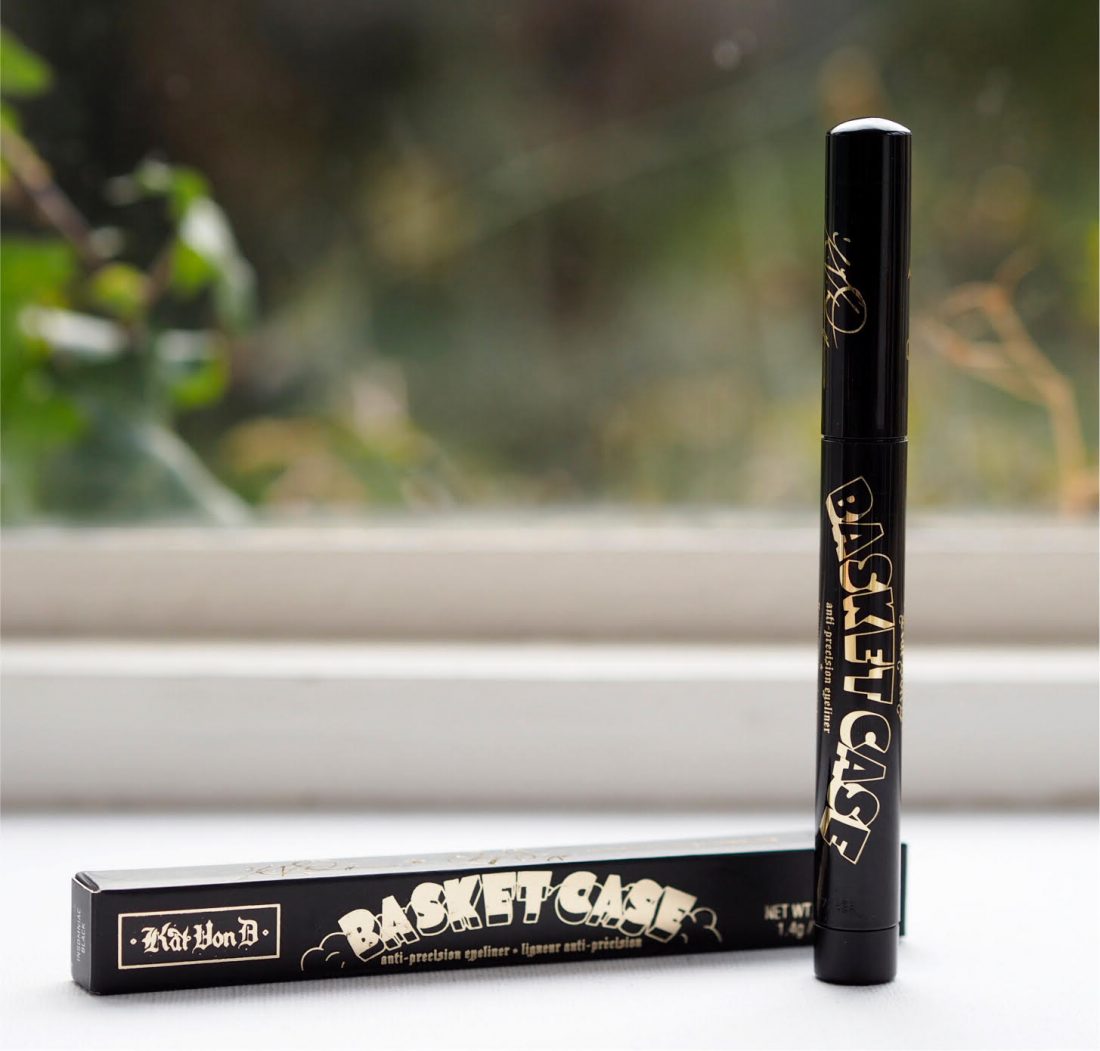 Firstly, I’ll address the name of this product. As you might imagine there has already been a backlash against the name – basket case being a slang name for mentally ill – that Kat has vehemently defended on Instagram, where all the drama plays out these days. It’s produced with Greenday Lead Singer, Billie Joe Armstrong (although it’s not really clear why!***), who had a song of the same name. So, while I feel mildly uncomfortable with the name (it’s not in the same league as the unfortunate ‘Wax Spastic’ lip shade from Smith & Cult) I don’t know whether it’s being over-sensitive to raise a brow or not. Kat’s got history with shade names and one thing I do know is that she has an answer for everything and she’s never wrong ;-).

Drilling down a bit further into the naming – it’s also ‘anti precision’ which I’m very much for! We’re so much about the perfect that a product that encourages us to not be so is all to the good. The shape of this liner (to all intents and purposes a khol) means that a perfectly precise cat flick is more or less impossible, instead producing an imperfect line designed to be smoked and smudged. I gave up on a perfect line a very long time ago and love a smudgy khol on my top lid – in fact, I’m rarely without it (I use the Clarins Khol Liner that has a brush to smudge with at the other end HERE). You can use Basket Case on lids or inner rims and it sharpens up a treat with the little sharpener housed at the other end of the colour. I guess, from the campaign shots, that use Sid Vicious and Nancy Spungen (I know, again, problematic) that it’s a hark back to punk rock and those angry, black eyes from the time, but a more modern interpretation would be the Carine Roitfelt (ex director of Vogue Paris) look that MAC extolled a couple of years ago – a little bit smudgy, morning after a late night look. All that said, you can literally just use it as inner rim liner and be done with it! I like it – it’s soft and deeply black, the sharpener actually works and who doesn’t like a khol? You can find it HERE for £17.

***Aha! Thanks to the wisdom of BBB reader, Annemarie: “Billie Joe Armstrong is a huge eyeliner fan… wears it a lot, and is the kind of anti Trump person that Kat adores (not to bring politics in to makeup – it’s just makeup!! But explains why she’d link with him) he’s also known for his “anti precision” look – smudged eyeliner etc. Oh and Basket Case is a well known song by the band about his own struggle with anxiety and panic disorder.”