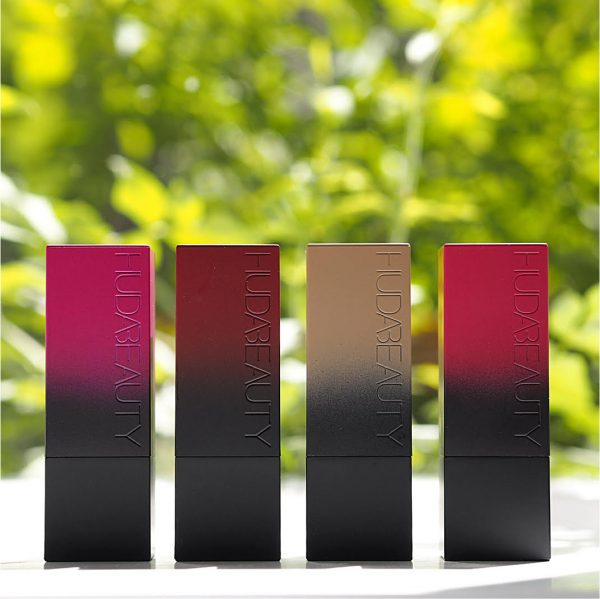 [productsample/affiliatelink] These are very good looking lipsticks, reminding me of Kevyn Aucoin in shape and look but with a bit more pzazz. The hand feel of squared off lipsticks isn’t the same as the familiarity of holding the traditional cylinder, but they’re in keeping with the more architectural look that some brands are taking on.

As you’d hope from a modern matte, these are gloriously soft on the lips – silky, even. Even though they look ultra matte in the palette, that doesn’t translate to dryness on the lip. They’re a ‘forgiving’ matte in that there is a little bit of sheen to them so they don’t deaden the lip skin completely and the pigment is strong without being over the top. In fact, they’ve confounded my expectations on every level – my assumption was they’d be dry and far too heavy, but somehow, they’re just not.

I love the chiselled look of the bullets that imply they’re going to be hard and yet, they’re so soft. I can’t not tell you that one of the lipsticks broke at the base (the actual bullet) when I was testing – I mean, perhaps I was heavy handed but I’ve been doing this a while….  The other three remained perfectly in tact so I’m prepared to assume that I was just unlucky.

In the swatch: Bachelorette, Promotion Day, Staycation and Spring Break. There are £16 shades HERE at £22 each (although the Kevyn Aucoin lippies are in the SpaceNK for £19.50 HERE) and I think if you’re a matte fan, you’ll like them. I wore Sprink Break for a good few hours before any wear showed.