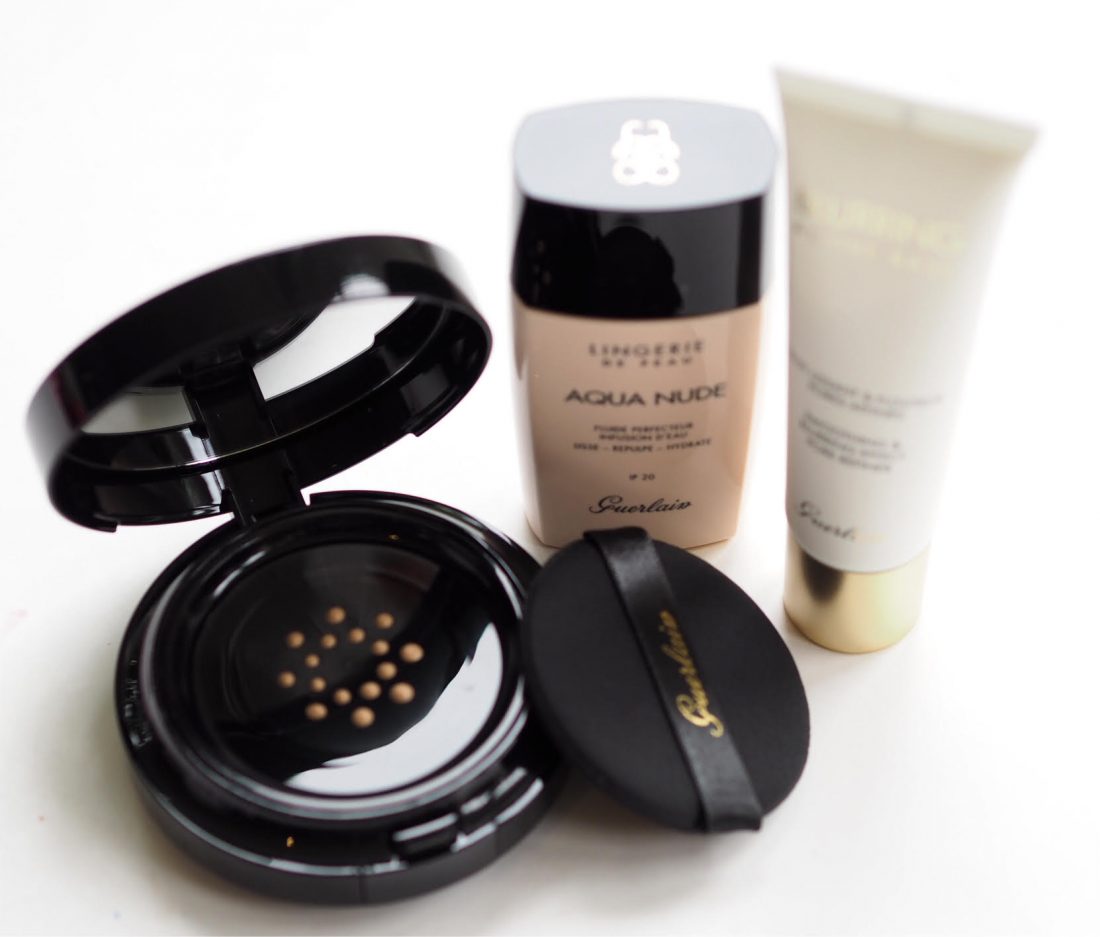 I’m reminded, in testing these new foundations from Guerlain, just what a hidden gem their base range is. I’m not sure how I forgot really the gorgeous fluidity and skin softening nature of a Guerlain base. Lingerie de Peau Aqua Nude is exactly the kind of texture that I love in a foundation and then a bit more.

The brand says it’s for ‘women who see make up as their discreet ally’, and I totally get that because of the lightweight nature of Aqua Nude that feels like a serum or light moisturiser on the skin but somehow gives the complexion a hit of luminosity that – on me – stayed all day. I’m thrilled with this! I’d recommend highly for older skin even though the brand (obviously) don’t specify an age-group. If I was to design an older skin base myself, it would be this and it’s as far away from the cruel, skin dulling mattes as you can get. Guerlain claims that benefits become more over time (plumping, smoothing etc) but I haven’t had it long enough to confirm that. I think it’s more BB than foundation, in reality, but the joy of skin that feels smooth and flexible and looks enlivened and glowy makes that a mere detail. It comes in 9 shades but I have a terrible feeling there are no very dark tones.

On to the Cushion. This is strange – it’s being presented as a ‘touch up’ tool (which I do see because of the portability factor) with an ‘anti-fatigue’ formula. However, without knowing that before I tested it, I put it on as a regular base on its own and of course, it performs just like a regular base! I think there is a bit of messaging confusion over this and I need more clarity on it. I understand touch up and I understand base but I don’t think I understand why this is one and not the other. Hmm!

The new Smoothing & Blurring Effect Pore Refiner would definitely get a best in class medal. It’s by a very long way one of the best blurring products I’ve ever used. It’s immediately mattifying and lightly blurring without making skin look dry and when I used Aqua Nude over the top, I could clearly see the side of my face that had Blurring Effect on it looked smoother (although strangely, a bit paler) than the one that didn’t. You will find with all blur products that the effect isn’t long lasting – it’s an instant gratification product that relies on you forgetting by the end of the night how you looked at the beginning (or not caring!) and while I’d say that several hours later I would be pushed to know which side is blurred and which side isn’t, it’s a rather wonderous effect at the start.

These are all scheduled to launch on 1st September – mark it in your diary for Aqua Nude; it’s a huge recommend for older and dry skin types. In the swatch above, it’s Aqua Nude, Blur and Cushion.