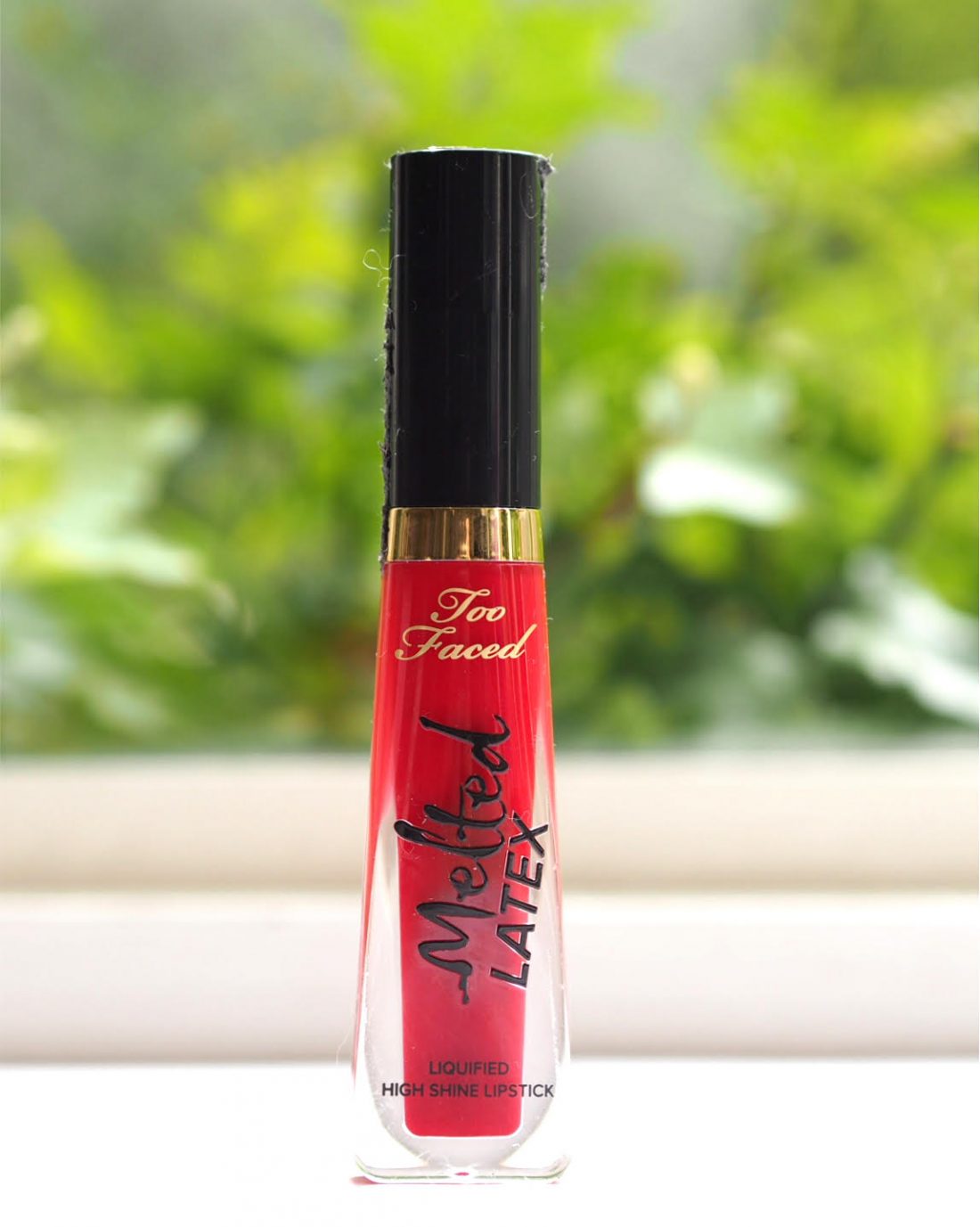 Ohhhh. These are impressive. Full name: Too Faced Melted Latex Liquified High Shine Lipstick. USP: Liquid lipstick in a lacquer formula that you can boost up to a gloss.

There is something rather special about this formula that means it really does stay on the lips and somehow lets gloss cling to it rather than dilute it or make it slip off the lips. I will assume that you have to use the Melted Latex Top Coat, but still, mine is still on the go three hours, one coffee and two slices of peanut butter on toast later.

The swatches are in the same order as the glosses: I’m Bossy, But First, Lipstick, Hot Mess, Bye Felicia, Strange Love and Peekaboo.

There’s a good colour selection – I chose Rated R for my test which is the bright coral shade in the top picture. The texture of Latex isn’t glossy exactly and nor is it dry like many liquid lipsticks I’ve tested. It’s just very comfortable and feels like a satin formula but a bit thicker than a normal lipstick. It’s certainly not weightless, but when I applied the gloss over the top, it didn’t feel sticky or gloopy.

Swatches are in the same order as the gloss tubes: Love You Long Time, Can’t Touch Me, Twilight Zone, Safe Word, Hopeless Romantic, Love U Mean It, Bite Me.

The other thing I noticed is that there is very little scent and certainly no flavour which is great if you don’t like that backwash of vanilla that some lipsticks and glosses can give you. The one thing I would suggest is that you exfoliate and moisturise before wearing and I only say that because unlike a gloss, it doesn’t just skim over any dry bits on your lips, but lays down pigment where your lips will take it. Often those dry bits grab more formula than anywhere else.

In the swatch above, it’s Rated R – the first is without the top coat, the second is with the top coat.

I even like the shape of the ‘bottles’ – like an elongated old fashioned nail polish bottle. They’re solid rather than squeezy and it’s a design I haven’t seen before. I don’t really have a single complaint here! There is a Unicorn Tears version coming – not sure if it’s a production issue or a marketing issue (sign up for updates and arrival dates) that has held it up. You can find them HERE for £19.