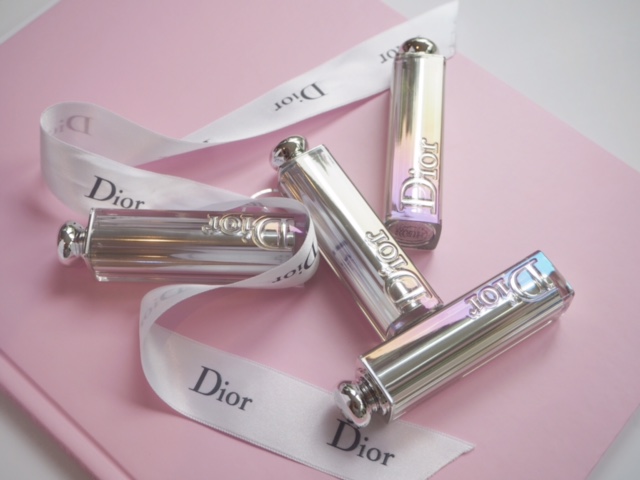 Good news – great news in fact – for Dior fans because a reformulation of Dior Addict Lipstick means a whole new set of colours and finishes; 35 to be exact. Dior lipsticks are pretty irrisistible – the packaging is so chic and the formulations so wearable (I prefer a Dior lipstick to a Chanel lipstick, but never say I said so ;-)) – they have a lightness to them that other lipsticks find hard to emulate.

The ones I have been sent to try are all fairly translucent – but feel balmy on the lip and for such a high sheen lipstick, I think the last is pretty good. So on my arm above is Smile, from the Glitter selection (but don’t be put off by the name – they’re not glittery, more pearlised), then Tribal (also from Glitter), Wonderful (also Glitter) and Gotha from the Flash selection.

The finishes are Glow (daily nudes and pinks), Flash (bold pops) and Glitter (light reflective). For some reason, I have three from Glitter and one from Flash so it’s impossible to show all three side by side. The composition of the lipsticks are interesting – a gel core made from 40% of the three most shiny oils used in cosmetics (ideally, I’d love to know what those are!) so that’s why they feel so sleek and soft on the lip. I love, love the cases – iridescent and shiny; a properly show off lippie!

This is the colour chart to give you more of an idea – big pigment smacks they are not, but instead a smoothing sheen that’s very lip softening and flattering. They’re £26.50 each and hit the shelves on 2nd September.