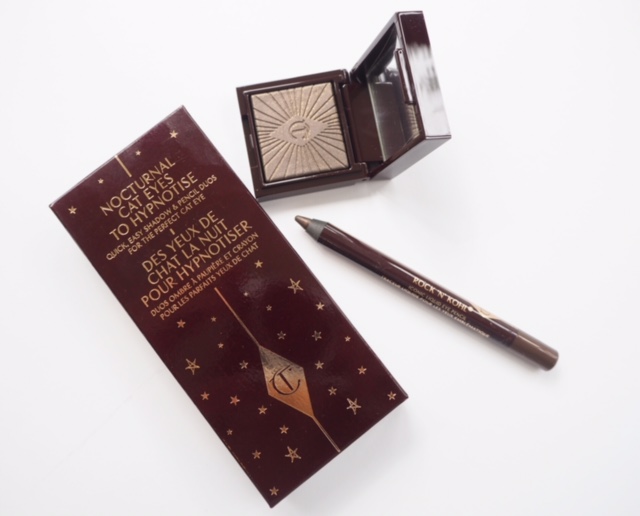 This is just a very preliminary post on what’s coming for Christmas (yes, I just said that out loud) from Charlotte Tilbury. I’m going away for a few days later in the month, so thought I’d post a round up of snaps from the launch event then. In the meantime, the thing I love the most from the entire gifting range is Charlotte Tilbury Nocturnal Cat Eyes To Hypnotise, above. It’s a little set of shadow and liner priced at £29 but the shadow is incredible. They’re unlike the Chamelions, or the Cremes – or even the palette shadow textures, and they’re massively infused with shimmer that doesn’t drop. I have had it on one eye for five hours.. not a twinkle out of place… and there’s a heavy amount of black pigment within the blend so you get an instantly smoky, deep lid, infused with gleam that just looks incredible in one swipe. According to my notes, it’s a graphite pigment which makes it truly intense – dark and bright at the same time. I have everything crossed that these little beauties make it as individual colours to the main line. I can’t see why they wouldn’t. My only point with the mini Khol is that you’re going to need one very tiny sharpener.

Speaking of Colour Chamelions, new shades are on their way…I’m a Chamelion fan for their ease of use and depth of colour (but do keep the lids on because they will dry out). I believe that these new shades are kicking off with two others as part of a Colour Chamelion gift box (£90), but above, the shades I have are Enchanting Indigo (for brown eyes), Intoxicating Violet (for hazel eyes) and Mesmerising Mink (for green eyes).

You needn’t, obviously, stick to the colour suggestions – I don’t.

On my lids, Chamelions don’t move, but if you have oily lids, I’d always suggest using a primer first. There is SO much more to come – it’s an extensive gifting range, with the star of the show being the Book Of Make Up Magic. I’ll include that in my round up for when I’m away at the end of next week.