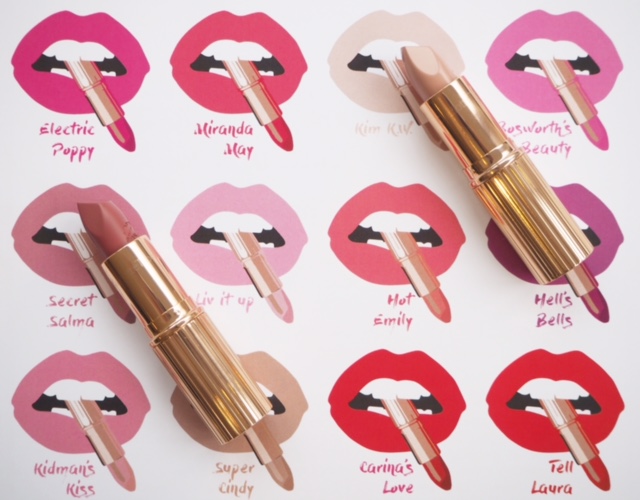 There are several new products coming up from Charlotte Tilbury, but the most important is a tie- in with Women For Women International where the charity will receive £1 from each sale of the new Hot Lips collection for the first two months. As we all know, CT is a brand that sells a whole lot of lipstick, so it represents a large amount, especially for a smaller charity.

It seems more important to focus on Women For Women International in this post than the lipsticks, but Charlotte has a lot of celebrity friends endorsing and backing this campaign (it’s going to be huge on social media under the #lipstickconfidence tag) and they’ve gladly put their name to an individual colour. We are talking about celebrities such as Miranda Kerr (Miranda May lipstick), Cindy Crawford (Super Cindy) and Nicole Kidman (Kidman’s Kiss)..

Back to Women For Women International. It’s probably not an organisation that you’ve heard of, but it was started in 1993 by Zainab Salbi, supporting the most socially excluded women survivors of war. So, we’re talking about Afghanistan, Bosnia-Herzegovina, Democratic Republic of Congo, Kosovo, Iraq, Rwanda, South Sudan and Nigeria where brutal conflicts have taken, and are taking place. I did a Periscope on this range and suddenly realised that I couldn’t be as frank as I can here (because some viewers have children with them, etc, and are listening on the school run), but many of these women experience sexual violence at a level that we cannot even begin to imagine. And that’s in amongst torture, breavement, loss of freedom and any other indignity you care to mention. It’s often the case that women are used as war-weapons – as a method of ‘ethnic cleansing’ and being forced to bear the enemy’s child. When this happens, obviously though rape, many victims are then ostracized by their communities. A sexual attack on a woman is often seen as an attack on a community and a culture erosion. So, while we are here talking lipstick, this is what is behind the fundraising for Women For Women. I think it’s a brave beauty brand that takes this on. The culture of the beauty industry is to align with charities and it is a generous industry when it comes to fundraising, but here’s something that badly needs input both financially and from an awareness raising stand, but pretty it is not.

I would say, don’t worry if you don’t have £23 for a lipstick because you can donate in other ways. I know that for many women, money is tight, but awareness is half the battle. Tell a friend, or tell several friends about Women For Women, because that’s giving to the awareness aspect and this is a difficult subject. It’s enough to do that. Women For Women International operate a 12 month programme in areas of conflict, teaching women about their rights and providing them with life, vocational and business skills so that, despite what’s happened to them, they have the power, education and strength to move forward. This year, they’ve launched their programme in Iraq to support Syrian and Iraqi women.

The Charlotte Tilbury Hot Lips Collection doesn’t launch til June and the social media campaign kicks off in July. You’ll see huge support for this from celebrities, so I thought that it’s worth flagging up now so you can read up on Women For Women International beforehand HERE.