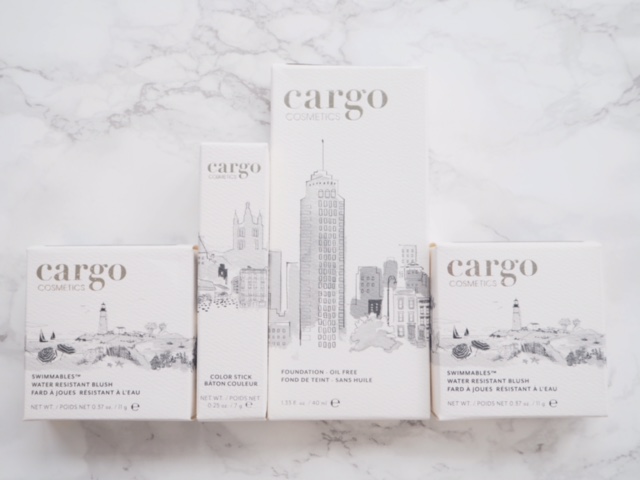 Cargo Cosmetics have been around in the UK for a while but haven’t been that easy to get hold of. I think at one time I remember that Sainsbury’s was a stockist – so if you never shoppped there, you’d never see it. However, the brand has taken over its own distribution so it has landed in a more sensible place (Debenhams) which makes it more accessible and in better company than loo rolls and tins of beans.

The products that I really rate from Cargo are the Swimmable Blushers – so called because they’re waterproof. They look like a regular powder blush but have an almost imperceptible waxy feel to them which doesn’t stop them diffusing beautifully on the cheeks. I’m not even a powder blush fan and I love these.

I’m popping this picture up because as luck would have it, one of the Swimmables had come loose so although it looks like a gigantic tin of blush, you are actually getting less that you’d imagine. However, a little goes a very long way with these blushes so even at £19 (on offer at the moment for £17.10) it’s going to last nicely. You really do only need a tiny, tiny bit.

The three shades here are Ibiza, Bali and Los Cabos.

I’m also really impressed with the ColourSticks – shown here in Champagne and Santorini. They’re very blendable with good pigment and a sheer finish.

The swatch is literally one swipe so you can see that they’re well pigmented. In fact, Cargo does very well overall on pigment – I think it looks more shy than it actually is, so these will last because you need very little. They’re £16.

I’m a little bit less excited about the glosses – or maybe it’s that the colours I have are so light, but although they have a milky finish which I love, there isn’t a lot of pigment there, and they didn’t last particularly long either. I don’t ever mind reapplication with a gloss but I felt they disappeared quite quickly. Thankfully, they don’t smell of vanilla, but instead have just a light, fruity scent that’s lovely. These are £12 each and the shades are Sahara and Stockholm (milky pink).

Cargo has been around since 1996 – available in the US in Target I think – and is definitely worth exploring if you don’t know the range. So far, everything I’ve tested is good quality with a very decent colour selection HERE.