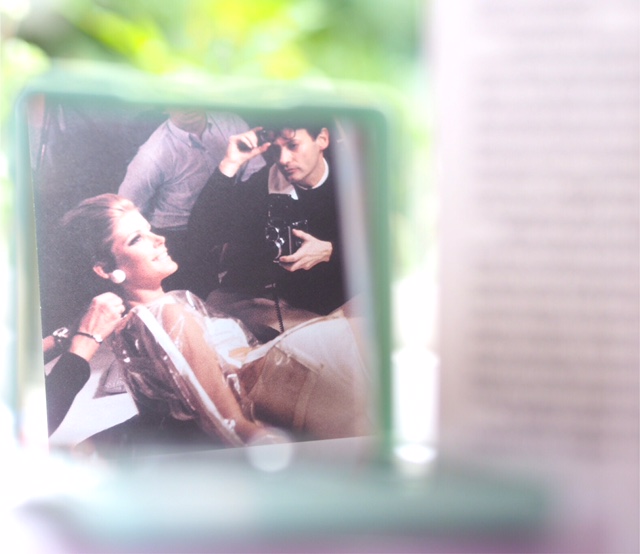 I’m guessing that any BBB readers who used cake mascara right at the beginning, when it was the only available mascara, are staring at this in horror right now! The reason the Cake Mascara Trend is making a come-back (temporary, trust me) is because the Besame Cake Mascara has sold out across the US. Besame used to be available in the UK – no more that I am aware of, sadly – and the brand produces some amazing, vintage inspired makeup (their founder is a cosmetic historian). I can remember my mum having a cake mascara in the bathroom cupboard in the 1970s so early adopters didn’t give it up readily in favour of these new fangled brush in a tube things! I must add that although lash blackening has been around forever, cake mascaras were top of the trends in the 1930s (Victorian women used to make their own from ash and elderberry juice).

I bought this cake mascara, Longcils Bonzca from Beauty Naturals for £12 HERE  (although Screenface has another version, La Femme Cake Mascara for £7.95 which I also bought HERE). When mascara morphed to a more ‘modern’ formula, it consisted of soap and black dye, but for present day Longcils Bonzca is mainly beeswax and dyes.

So, how to use? Add a few droplets of water to he surface of the cake (if you’ve used Laura Mercier Cake Liner, it’s the same method) and then blend with the brush to a thick paste. Whatever you do, use clean water – don’t use spit: I’m saying that because people did. And maybe still do.

You then use the paste on the brush to comb onto your lashes. Now, this brush is not as easy to use as the brushes we’re used to now but if you have a spare mascara brush spoolie you could use that, but neither is it as hard as you might imagine. I got a pretty good result first time around although a little transfered to my lid and I had to wipe off after it was dry. The formula coats to a spiky lash look unless you really pile it on and looks easily as good as any other spiky lash mascara I’ve used. The big flaw in this formula is that it isn’t waterproof – at all. Don’t chop onions, cry – or even excessively well up – or poke yourself in the eye while wearing it! However, I waited until the end of the day to waterproof test it and it had stayed perfect for all that time.

I love the novelty of this and I enjoyed trying it out – I don’t think it will ever replace the ease of use of wand mascaras for me but I know that vintage lovers are major fans of this for authenticity of the era. I should also point out that the Besame version is $25 (currently being Ebay’d for £30+). The packaging is prettier for sure but you don’t need to pay out big bucks to try the Cake Mascara Trend. You can also multi-task it for brows or lining so it is a good budget buy.

As it turns out, original vintage Cake Mascara is £££! Chanel had a black version (they still have a cake liner HERE, and actually I have this – I used to love it) and tried to give it a revamp in the 1980’s with a blue version.