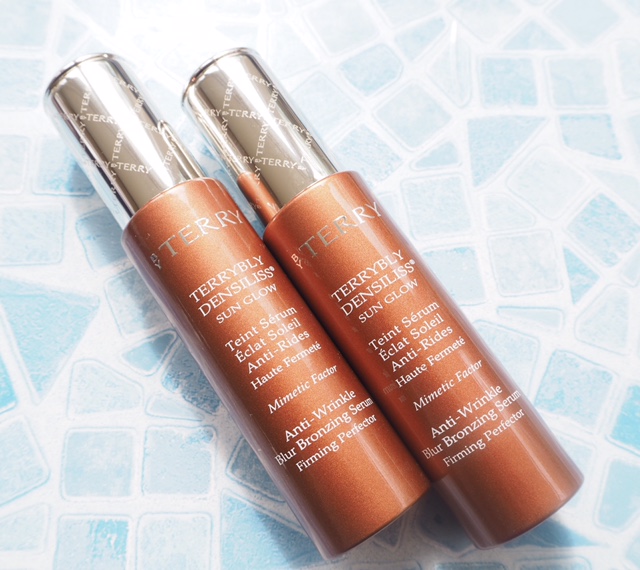 See, now here’s where I come a bit unstuck with By Terry. The By Terry Sun Glow is billed on the packaging as an anti-wrinkle, blur bronzing serum for a sheer tan. Sheer is right. Blur isn’t. It may have blur ingredients in it, but the very sheerness of it means that any blurring is not discernable.

I don’t know why it’s billed as anti-wrinkle either – yes, it contains collagen but you’re using it more as a wash than anything, so the chances of it doing anything in that department with such a fine layer going on is remote, in my view. Nonetheless, what By Terry Sun Glow does have as a distinct advantage is that it doesn’t make your skin feel dry like many bronzing tints can do. In fact, my skin has felt nicely hydrated all day (I have the lighter shade on one side and the darker on the other by the way!).

The first is Sun Fair and the second is Sun Nude – there is a third, deeper colour too, but I don’t have it. I think that By Terry Sun Glow works best to boost a natural bonne mine look – if you’re paler than pale, this may come up a little un-natural looking, but if you already have a bit of sun or are olive toned, then it does look very natural indeed.

Despite all the anti-wrinkling and blur hype, I still think this is best viewed as a very nice skin tint – if you were hoping to blur out all ‘imperfections’ you’ll be disappointed. Because it’s so sheer, it’s not a foundation alternative or even a BB alternative and your natural skin will show through so you need to be confident with your skin to begin with. I’d start wearing this on maybe the third day of a holiday or when it’s really hot and you can’t bear anything oily on your skin. I know it sells by the bucket load even at £76 (HERE), but either I’ve massively missed something or it’s just quite average.