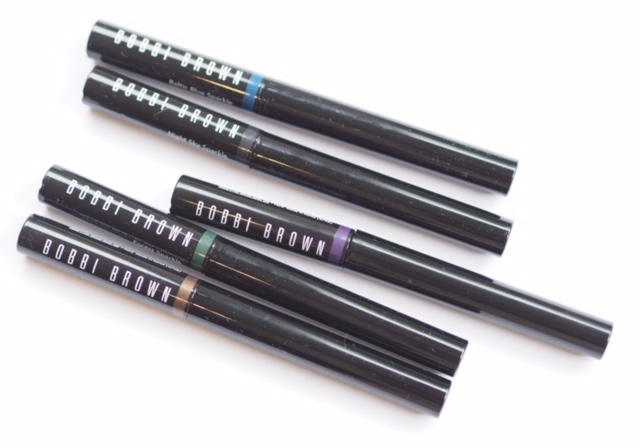 Well, the Bobbi Brown Long-Wear Liquid Liner collection had me at hello. I have to credit 3INA with making a liquid liner in red that I wanted to wear badly enough that I found a way around my complete incompetence at application, but now I’ve found a good way to do it, it’s all systems go.

There are five metallic shades in the collection and not one I wouldn’t wear. They retain their metallic element when dry and don’t move until you want them to. The Bobbi Brown Long-Wear Liquid Liners have a bit of Urban Decay about them in terms of deep, solid pigment and shimmer – I’m so impressed; they seem very un-Bobbi! Because I’m so bad at liquids, I’ve started to paint them onto a flat edged brush (this one is Crown) and nudge them at my lash line, edging across, instead of aiming for one perfect sweep – which will never  happen! This is also a good method if you wear glasses because you aren’t so reliant on precision. What happens is that you get a very decent line (do it before mascara because you may end up with some on your lashes) over your lash line which you can then use as a guide-line to take the fine brush over if you want it more intense. I promise, it works! Nudge along..don’t sweep..and you’ll need to re-apply from the liner brush to the flat edge more than once.

So, the shades are (from bottom to top) Golden Bronze Sparkle, Forest Sparkle, Violet Sparkle, Baltic Sparkle and Night Sky Sparkle. They have literally just launched as an on-line exclusive today for £23.50 HERE. I think they’re every kind of handy to ramp up your makeup look and get an intensity that doesn’t rely on a heavy smoky but just gives your eyes some oomph. Oh, and don’t worry about eyelid creases – with the push-on method, you’re more in control of the pigment and it doesn’t just skim over.