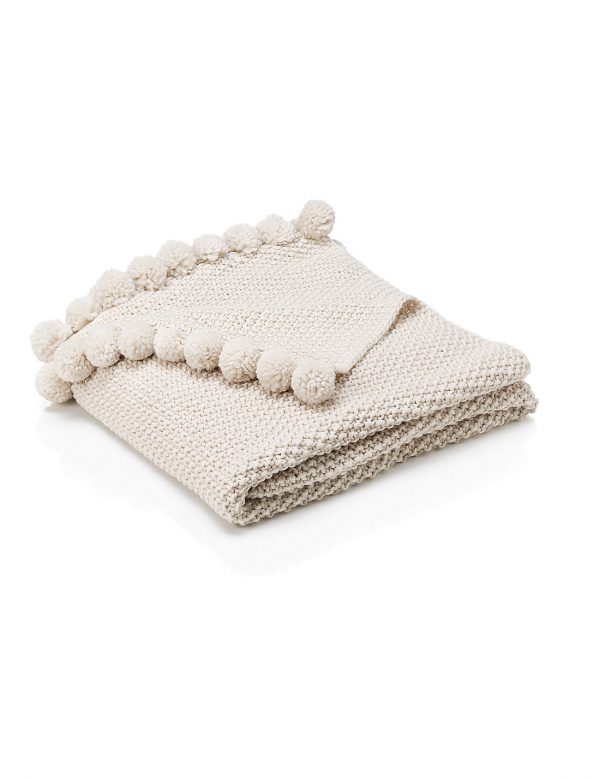 I completely ran out of time yesterday to do Accessory Wednesday, but it turned out quite well! I was doing the Christmas In July rounds and stopped off at the M&S press day – in the homeware section showing Christmas trees, stars, baubles and as much glitter as you can imagine was this Pom Pom throw. I flippin love a throw although there have been a few throw related arguments in this house – try asking Mr BBB what a throw is for. He still doesn’t get the difference between a throw and a blanket that goes on, and crucially, stays on, your bed. I’ve said it’s kind of a cover up for bits of furniture or a portable blanket or a thing to snuggle in while you watch TV or even just a ‘thing’ to look nice and compliment your decor… but throws are like cushions on the bed to him. He gets the concept of a cushion on a sofa, but a cushion on a bed? That’s a whole other domestic!

Anyway, this a long winded way to say that the Pom Pom throw has little to no chance of not making into my house… and it’s not even for Christmas.. it’s in stock now in grey, duck egg, cream and a burgundy shade and is super-snuggly. According to the homewares PR it’s one of the best selling items in the whole of M&S homeware and doesn’t stay in stock for long.

I know.. it’s summer and you don’t need a throw. But, as we very well know a shiver is just round the corner and, well, pom poms. It’s £69 HERE.