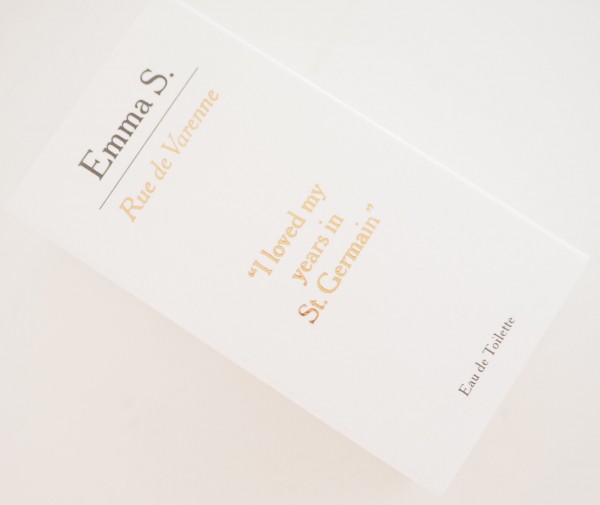 I’ve got a few Swedish brands coming up on the site over the next week or so, and I’m kicking off with Emma S Rue de Varenne Fragrance. The Emma S brand is predominantly skincare, founded by Emma Wiklund and Nora Larssen who became friends after working together. Emma Wiklund was a successful model when younger which sparked her interest in skincare.

Emma S Rue de Varenne Fragrance is a tribute to both the years spent modelling in Paris and the neighbourhood of St Germain where Emma lived for several years. I absolutely love the packaging for its simplicity and bareness – that quote in the centre of the box in rose gold is the perfect picture; nothing else is needed.

However, you do actually get something else! When you slide open the box, the transparent bottle lets a picture of Emma show through which personally I found very odd! I am totally game on for a picture and it’s a very cool idea, but I just didn’t want to see a photo of a person for some reason. A street scene maybe, or ingredient pictures (luly of the valley, pear, white musk and suede) but don’t ask me why – I just didn’t expect a face staring back at me!

The fragrance itself is very pretty – it’s less a ‘crisp white shirt’ kind of scent and more ‘soft white linen’ that’s almost a secret with yourself because it becomes one with your skin very quickly and reminds me of the Bobbi fragrances in its simplicity and gentleness. It’s not particularly long lasting, but the size is definitely handbag so you can have the pleasure of re-spritzing whenever you want. The only place I can find it is HERE and I don’t know if they ship and it’s around the £34 mark. The Emma S website isn’t showing any stock of anything (I have no idea why) but to get more on the background of this brand you can see HERE.