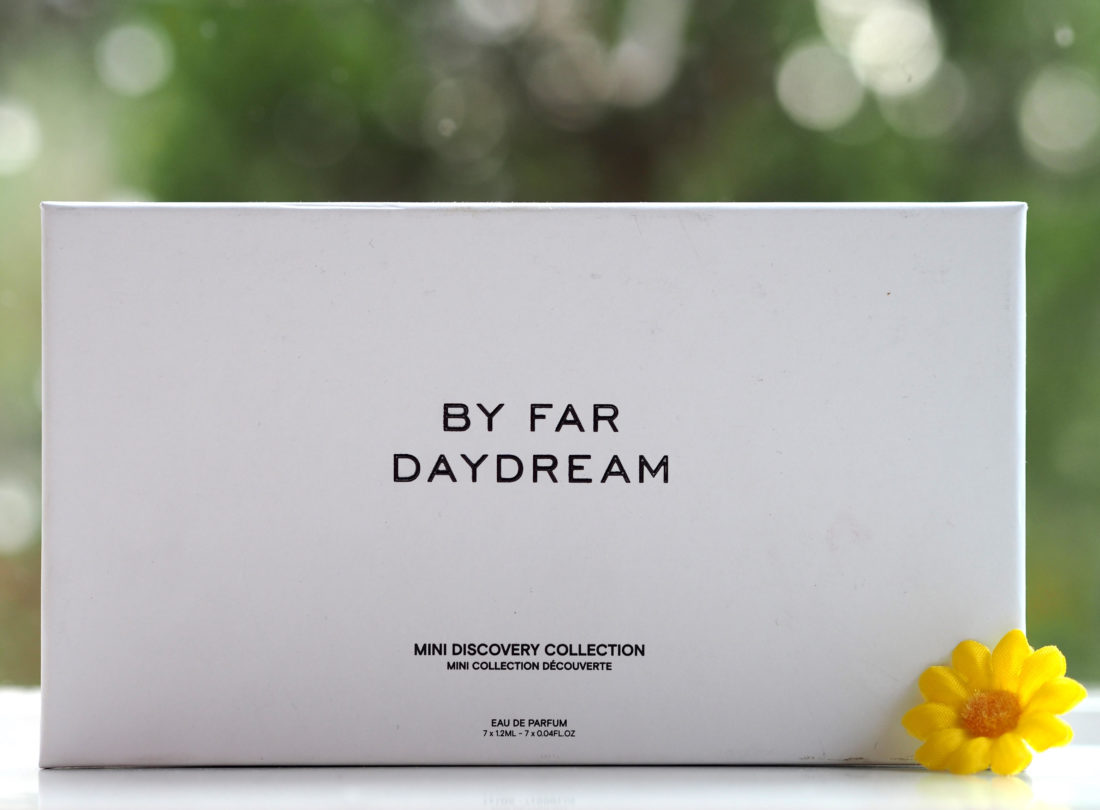 [unpaid/affiliate] I’ve seen the By Far fragrance brand several times in Selfridges and found myself very drawn to it in terms of looks but these days I don’t really want to buy my fragrance from a counter – I need some time to think and to try without having notes thrown at me or feeling under a time pressure: it doesn’t matter what’s in it really – if it resonates, it resonates. So, when my friend Kicki arrived to dinner at The Brasserie of Light last week wearing Daydream of Hopscotch, it was such an instant and profound love that I even surprised myself. Even more of a surprise that she nipped off during dinner to buy me the sampler set. So, not only do I have very kind friends, but I have had time to experience all seven of the fragrances and I have been dying to post about them!

If you don’t know By Far, it’s a luxury shoe brand that is apparently the ‘go-to’ of choice of Kendall Jenner which might account for how she ended up as the face of the fragrance arm. I don’t have any feelings one way or another about Kendall Jenner but her presence wouldn’t sway me to buy anything. Someone asked me to review some exciting fragrances and I have to say that By Far Daydream is very much that… exciting, innovative and energising.

This is how the single fragrances come – with a fragrance filled ‘charm’ to attach to your bag and a full size bottle that you can top the charm up with. I got Michael Kors vibes from this for some reason but they’re all bright, tactile and vibrant with an extra shot of gold to make it nearly too much but also too eye-catching to pass. I’ll start with Daydream of Hopscotch which is what got me so interested in the first place. It’s everything I thought I would not like – almond, tonka bean and vanilla with a centre of play-dough. It’s the play-dough note that immediately sent my olfactory memory into overdrive – the wrapping notes sound ultra sweet but they’re not insanely so. If asked to blind test the notes, I’d describe Barbie holding an armagnac. That plasticky, rubberised doll scent with roasted almonds and something very charming about it, too.

Next up is Daydream of a Splash which somehow quite literally is the smell of the moment you launch yourself into the water. It feels as though the three Grasse based noses who created this collection had free reign to create the scents that they’d only ever dreamt of being commissioned to make! Splash is so aquatic – in fact perhaps the most aquatic fragrance I’ve ever encountered – and is grounded by green cactus and sandalwood. There are some sparks of jasmine which come after the watery notes but the first sensation of water is quite something. In not so effusive news is the fact that it didn’t last long at all – on the one had, continually refreshing it would be nothing but a pleasure but on the other hand at £180 a bottle (refills £110), I need a little longer per spritz. Actually, something I could say about all of the fragrances is that the initial olfactory sensation is the big impact – they all (bar Hopscotch) settle away from the initial power note. 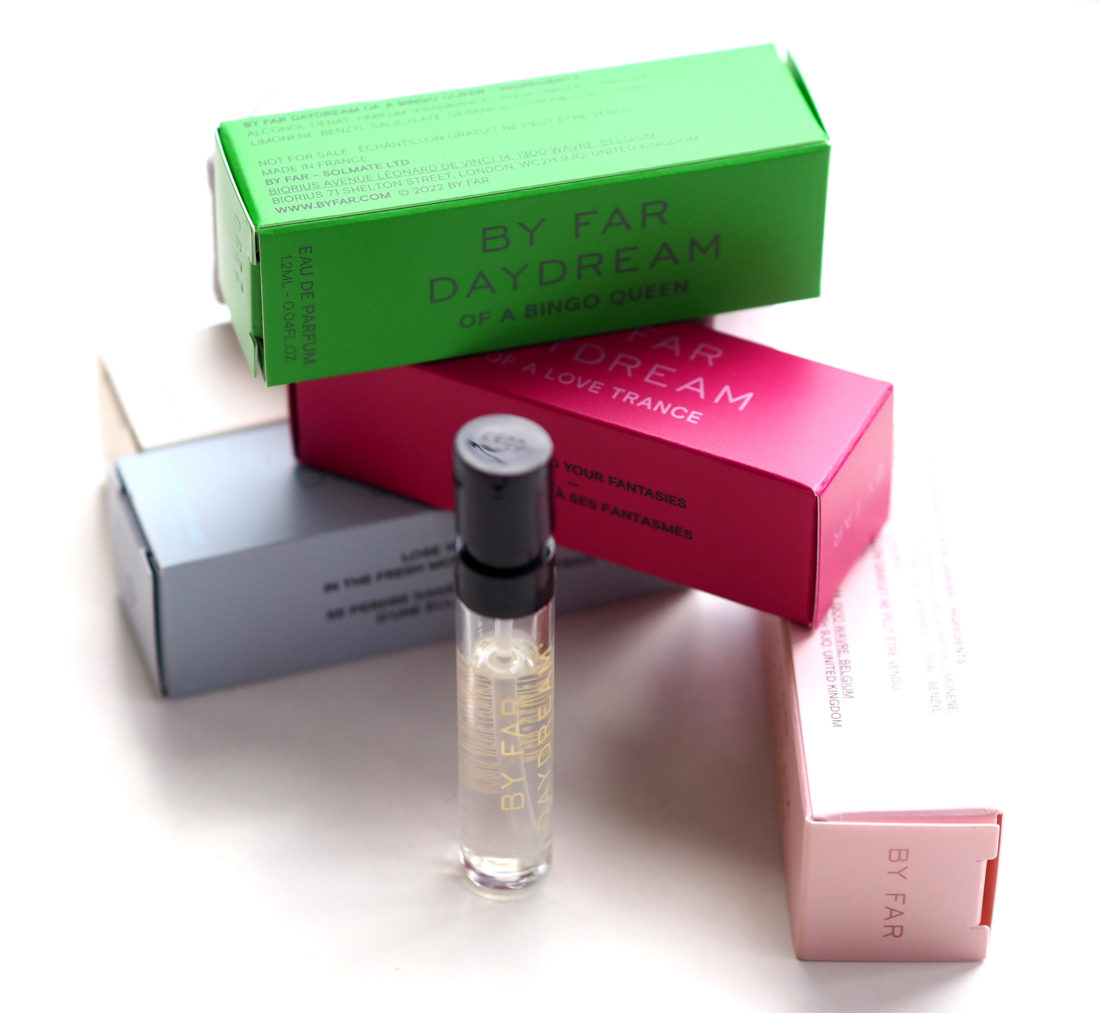 Daydream of Passing Clouds didn’t quite catch my imagination in the same way but it’s a gentle and whimsical scent that’s cottonish with pastel rose and white musk. Patchouli gives it a bit more of a kick and appears later on but the pink pepper is present from the get-go. In fact, the pepper note predominates but because it’s so nicely wrapped it’s like a sharp floral – that sort of ‘chilli in chocolate’ contrast that messes with your senses thing. Daydream of a Rose garden is charming – I swear I can smell tea notes but none are listed so perhaps its the mint, rosemary and basil. It’s not your usual rose, that’s for sure, but it is delicate in its way – watery and sunshiney and the sort of scent you could fall asleep wearing because it’s comforting and clean.

Daydream of Someone I Knew is like Hopscotch in the way that your olfactory senses sit up and listen straight away. It settles delightfully into a seamless blend of Earl Grey tea, jasmine and oakmoss. Nothing fights with the other which makes so smooth (and sniffable). I have come back time and time just for a little hit of it. The tea is exactly like Earl Grey and you couldn’t mistake it for any other variant – perhaps that familiarity is what is at the heart of the scents and why they drive reaction. The familiar taken out of context, shaken up and then stirred some and out pops something you know but have also never met before. Daydream of a Bingo Queen is a delight – completely unrestrained and delightful. Actually, I can tell you that this is the fragrance I was offered to try a few months ago and when the (lovely) By Far assistant suggested it had notes of ‘four leaf clover’ I passed on the grounds of  ‘I think not!’. It just wasn’t credible and has led to such a delay in discovery. But, indeed it does have notes of four leaf clover listed and I still think very much not! However, I get it on the ‘green’ note level – it’s not quite grass but definitely vegetal – bouncing alongside neroli with a base of softly musky ambrette. It’s a familiar scent somehow because of its skin-like qualities. Its the only fragrance I felt I have smelled before and I wish I could pin down where! I’ve got something vague of Le Labo or Byredo floating at the back of my mind.

There’s also something of a plastic note in Daydream of a Love Trance although I’m not sure where it’s coming from. Maybe the hazelnut because nutty aromas can twist themselves about a bit – it’s not unpleasant at all. Or the ylang-ylang because that’s so heady it can tip to something more than your nose can cope with. But, for sure, Love Trance is a fulsome fragrance that is full of sweet heat and sunshine. Tuberose absolute gives it a smoothness and creaminess that allows all the notes to blend harmoniously to create one big, happy, heady brew that’s extremely more-ish. I have loved testing out these fragrances – they’ve ticked all the boxes of excitement, surprise and pleasure but they’ve also got me really thinking about them and focussing on trying to smell each note. What a treat. The set is £28 and if you have even so much as a passing interest in perfume, I just would HERE :-).