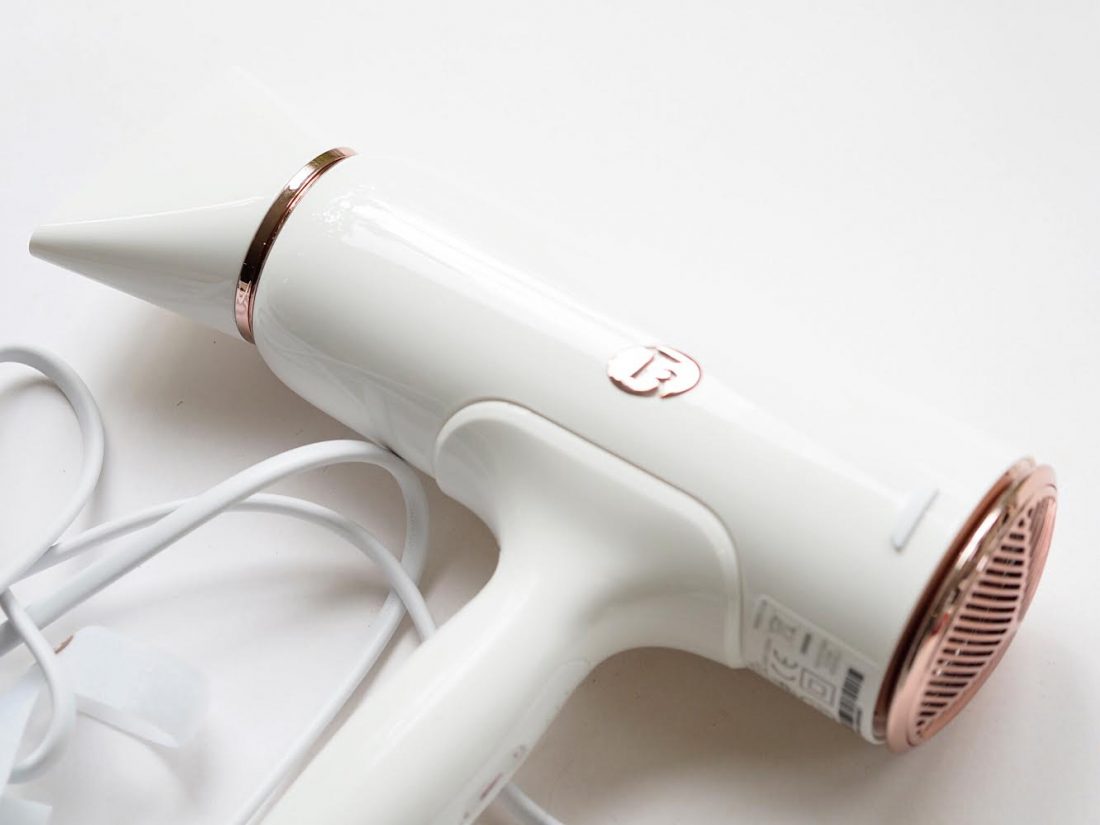 I would previously have said, with confidence, that you’d have to prize my Dyson hairdryer from my cold, dead hands because it’s just that good. However, despite being sent several hair tools to try, with the exception of the Revlon Salon One Step Hair Dryer & Volumiser, I’m never really moved to change to anything else. However, the T3 Cura IonAir Hairdryer is a damn good looking hair dryer and I was swayed by that alone to wonder if looks and performance were a match.

One of the big sells on this dryer is that it gives a frizz free finish thanks to negative ions. That does seem to stand up because the first thing I noticed is how soft my hair felt post-dry and that it looked sleeker than usual. In terms of weight, it’s light – at least as light as the Dyson I felt – and it’s a comfort fit in the hand.

The one thing I’d say – and it could be that it’s just a matter of time while I get used to it – is that I found the buttons on the handle quite touch sensitive so I ended up reducing the heat of the air flow several times without even noticing and couldn’t work out why it kept going cool. When it’s  at full heat, the dryer fairly whizzes through your blow-dry – I really didn’t have to spend very long at all which is a huge bonus and liked that it’s not particularly noisy. There are 3 speeds that you can have at any heat you want, a cool shot button and temperature options. Once you’ve switched it off, the next time you turn it on again it will start at the heat you ended with.

I didn’t appreciate the little homily on the insert! What on earth made them think that’s a good thing to say? Overall, though, I’m pretty impressed with this in terms of ease of use and result. At £195, it’s certainly a considered buy but it did live up to expectations of a luxury dryer in performance. If it’s within budget, I really would recommend it (HERE) but would I give up my Dyson? It’s too close to call!

PS: I use the Revlon tool if I want to do a ‘styled’ look which is rare, but on those odd occasions, I’ve found it so helpful. Largely, I think it’s because you get as close to someone else pulling the dryer through your hair as it’s possible to get – and we all know it’s better when someone else does it! It is much better at styling than a brush and dryer alone –  although takes a bit of getting used to – it’s about £48 HERE. The Dyson Dryer is £299 HERE.