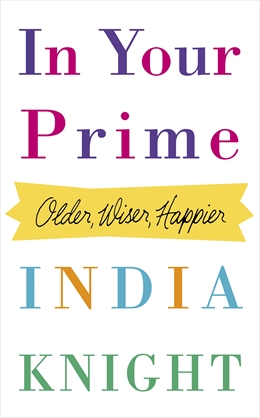 I received a preview copy of India Knight’s forthcoming book In Your Prime – with strict instructions that it may appear on here as long as it also appears on BBB… erm, I don’t think so – this is the target audience exactly! There might be fewer of us but it’s 100% relevant. I said I’d buy it myself and put it where I like, but a copy turned up anyway. So, that aside, all I can say is beg, steal or borrow for In Your Prime!

I genuinely didn’t like India Knight’s book, Mutton, but this is whole other thing. Reading it is like having your smartest, most sensible friend by your side with whom you can chat about anything at all. And, when you’ve already had the wine! She’s just got the best way of writing that feels like she’s talking to you directly – I’ve learned and I’ve laughed as well as nearly nodding my head off in agreement to many of her views on being an older woman. In particular, India, too, wonders why women hit the ‘very short hair stage’.. I’ve often thought that unless you have bone structure of Audrey Hepburn then it’s one of the cruelest things you can do for your looks. Except, til now, I’ve never actually said it out loud. I can sit watching people on TV and I am mentally scribbling on longer hair if I see women with drastically short locks. It’s a very defined look that’s only going to bring out the best for very few.

When are clothes mutton? I’ve deliberately steered away from this subject because I truly think you should just wear what you want and hang what anyone else thinks, but India goes straight in (short skirts for a start). It’s useful to hear someone else backing up what you secretly think about yourself. I have wondered, to be fair. “Beware ethnic clothing that isn’t relevant to your ethnicity…” A good point.

It’s pretty clear that India isn’t a fan of Botox or fillers, whereas I am. She cautions not to end up with Humpty Dumpty face – a face devoid of all creases. I’d advise the same.. but a little here and there will always do more than the most expensive of moisturisers in eradicating deeper lines if they bother you. Most of the beauty advice is rather generic, but you know, it’s sensible – it’s what your best friend would tell you.

I love the chapter on Sex & Relationships – it’s true that it’s easy to assume you are the person having the least sex ever (particularly if you’ve been married or in a relationship for many years) but India’s take on that is that nobody that has a long term partner is having chandelier sex, and it’s absolutely fine, provided nobody’s feeling rejected and undesired to carry on as you are. This is something that you never hear! It’s one of the most difficult areas to talk about – even with your best friends. India’s just saying what you’re thinking on this one! There’s also a page on How To Get A Divorce, if you’re really unhappy.

I can’t tell you what a wonderful woman’s companion In Your Prime is. It’s very difficult to address ‘all’ older women – fifty is not sixty and sixty is not seventy and so on – but India has done an amazing job in crossing the generations with advice that will resonate with all ages.

In Your Prime launches on 26th October – get it on pre-order HERE now!

Home › Beauty › In Your Prime