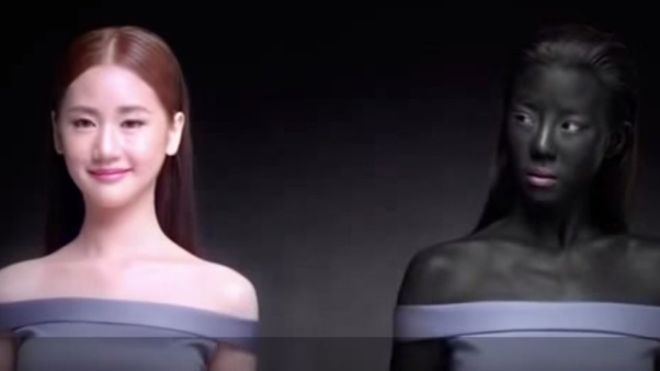 So, the tricky subject of ‘skin whitening’ caused a rightful furore on the internet last week, fuelled by an ad and video from Thai based brand, Seoul Secret. The premise of the ad is that you’ll be more successful with whiter skin. To my eyes, this is absolutely shocking (and in fact, to many other people’s eyes too, as the ad and video were removed) the brand issued an apology saying they hadn’t meant to offend anyone. Oh, right then.

However, while we’re all in the throws of being ecstatic about Asian beauty (me very much included!), this whole ‘whitening’ issue is being swept under the carpet when in fact, it’s a good opportunity to face it head-on. A few years ago, I contacted a beauty editor from an Asian magazine to try and get her spin on why ‘whitening’ was so important. I got back a very detailed reply that amounted to it just being something that she’d always done and it was a cultural thing. I felt it wasn’t publishable at the time because it seemed such a narrow view, when in the UK beauty world, we are championing more make up for women of colour and begging for more tones to suit the diversity of our nation while embracing beauty products from other countries and cultures.

And yet, ‘whitening’ is certainly present in the UK beauty arena. A quick check on Selfridges.com shows Guerlain Blanc de Perle, Suqqu Whitening Concentrate and La Prairie White Whitening Lotion. At Harrods.com you’ll find SKII Whitening Source Skin Brightener and Sisley Phyto-Blanc Absolute Whitening Essence. You’ll often see the ‘softer’ word, ‘brightening’, used instead of whitening, and while these products don’t contain the dangerous ingredient Quinone which can have a bleaching effect on skin, they are often aimed at those that want ‘whiter’ skin. Skin brightening is a tricky one – who doesn’t want their skin looking bright and even toned? Brightening often targets un-even pigmentation to get a more uniform tone to the skin, which doesn’t seem that undesirable to me, but ‘brightening’ can often be a sub-text and word use for overall skin lightening that just sounds a bit more palatable to the western ear than whitening.

Horrid and clumsy as it is, at least the Seoul Secrets ad gives us a window into another culture where it’s acceptable to suggest that darker skin is not desirable. And that, in turn, gives us a chance to have a think about whether the UK beauty world is treading on some dangerous ground. We are following Asian beauty culture as a pack right now – it can only be a matter of time before some intense re-labelling (if it hasn’t happened already) occurs as more and more Asian skin care brands enter the UK market. I’ve just been scooting around the Dr Jart Korean site which has an entire section dedicated to ‘dark skin’. On the US Dr Jart site, there is no such section.

I don’t think any beauty culture in the world would come out all sunshine and roses – we all have very set ideas of what is beautiful and what isn’t (hello Instagram filters!). The global reaction to the Seoul Secrets ad has been so strong that it will hopefully serve as a warning shot to beauty brands that tread a very precarious line between whitening and brightening.