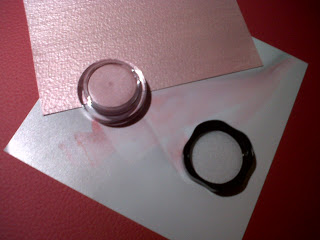 Ok, stop it. This evening I had the very great pleasure of meeting Dick Page, Make Up Artistic Director for Shiseido. Shiseido is a brand that I’m getting to know very slowly but the more I see, the more I like. We were looking at his Spring/Summer 2012 colours, but more to the point I think, is learning about the creative process he uses to achieve colours. I guess, if you’re anything like me, you don’t really think about where the colours came from as such, but more you either have an instant connection with a colour or you don’t. I had that immediate connection with a shade called Sunshower; a kind of mild but vivid orange flecked with shimmer.

In order to create colours that are different and exciting, Dick uses all kinds of inspiration. Sunshower came from him mixing up food colouring, Campari and bath salts in his bath; once the sunlight hit it he snapped a picture and translated it through paint to an A4 sheet. This sheet is then carved up and sent to various parts of the labs at Shiseido and the colours are brought to life in the form of make up. The same photo-paint process is used for all the colours he creates. I’ve got some pictures of his original painted sheets, but forgot my camera so had to take on my Blackberry. Blackberry, for some unknown reason, have decided to put cameras in the their phones that might as well come out of cracker for all the use they are..and no flash either. But, I digress.

I’ve got a bit of a thing about glittery bits in my make-up; I hate any drop and drop is the kind of thing you don’t actually notice in front of your own mirror, but as soon as you leave the house it lights up like a flare all over your face. The great thing about these high lustre cream shadows is that there is no drop. Win. But, understanding the process, and knowing that there really is a creative process behind each and every shade, with so much thought and effort put into them makes them extra special I think.


Anyway, I had a chat with Dick, asking him what he thought about blogging and it’s influence. Erm, I’m not sure it went that well. Funnily enough, he’s a big bear of a man with a beard – he was wearing a checked shirt too – and he’s got massive hands; certainly not the kind of hands you’d associate with the delicate work of make-up artistry. If you were playing the ‘guess the job’ game, you would never, ever have him down for make-up. He thinks the problem with blogs is that they take all the magic away by showing things too early. And, of course, he isn’t the only one that thinks that, but you know, keep making the magic, Dick and then we’ve always got something to look forward to. In fact, I kind of got the impression that he’s just not that into blogs (but, apparently his sister is!). Talking to him about how I felt about shimmer, and that maybe it should be left to younger eyes than mine, I kind of questioned whether I could or couldn’t in a bit of a dithery way, admittedly. He said he wasn’t a social worker. Right-o.


Aside from the fact that I don’t think Jane and Dick will ever be besties, it was quite something to meet him; I loved the way he really ‘gets’ colour and texture, and equally loved the unexpectedness of him. But, I’m not expecting a Christmas card ;-).