Wednesday Diary: Backstage at the ENO 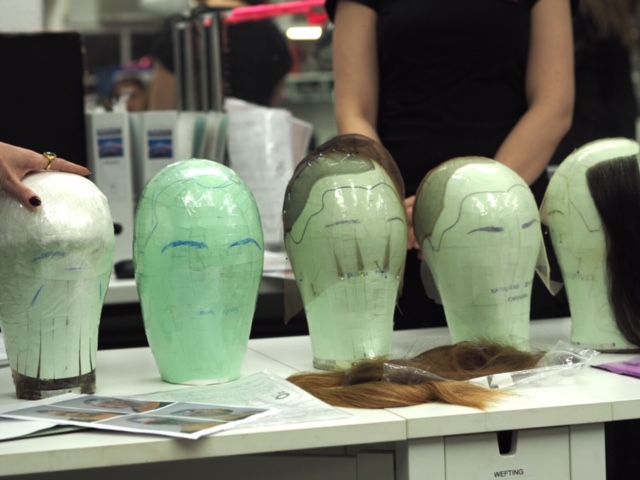 Last Wednesday was World Opera Day and I was invited to go backstage with the English National Opera at the Coliseum to take a look at the work that goes on with hair and beauty for productions. I’ve got to admit that I was all prepared to skip the performance because I don’t know opera at all and have never fancied it. More on that later…

After going onto the stage and having a sneaky peek of what it’s like to look out into a vast audience (the Coliseum seats 2,359) and seeing props up close we headed to the wig room. The Coliseum holds thousands of wigs and even more reference books and magazines because the department makes and styles wigs to accurately portray a huge variety of historical periods. It’s basically a library of wigs. Wigs, when they’re not on people with faces look weird: they’re not creepy as such, but just all wrong without a person wearing them.

How wigs ‘appear’ isn’t something that’s troubled my brain, to be honest. But as each main character has a new wig made for each new opera, and the operas are in constant rotation, there is never a time when several wigs aren’t in progress. The hair is human hair usually, and each strand is stitched onto a lace ‘cap’ individually and the ENO employs ‘knotters’ to carefully place and knot each hair – it can take over 70 hours. Where possible, wigs are recycled and re-styled, and no surprise because every new piece costs in the region of £2.5K.

The (surprisingly) little room where the wigs are tended was crammed with drawers, hair, wigs in progress and a huge wig oven, where they’re dried after washing. Most wigs need washing and restyling after every performance. In the case of beards, for example, they’re curled round cocktails sticks to keep their bushiness, or if they need more volume, some yak hair can be added – or for ‘wisps’, mohair. Who knew?!

In terms of makeup, although we didn’t get to see their collection, guess who supplies the ENO? MAC. Generally, the ‘stars’ get their makeup done for them – everyone else (the chorus) does their own. However, they’re all taken through a face chart and given guidance on what to do. Opera makeup has changed – it’s not pan stick and garish colours any more, and not least because film directors have taken to producing them and they want more natural makeup than traditional theatre producers. Many operas are filmed and it’s a different beast than stage – a foundation that looks perfect on stage can turn green on film. It was so interesting.

I planned to stay for the first of three acts of Rigoleto for the sake of politeness, although we were all told it was absolutely fine to leave when we wanted to. Honestly, though… I stayed right to the very end. In fact, I could have done more and this was a 3 hour performance! If you had ever asked me to sit through a 3 hour opera performance I would have run a mile, but it was one of the most emotional, beautiful experiences that I’ve ever had. It was just incredible. I had all the preconceptions of opera that I think many people have – that it’s boring, stuffy and incomprehensible. At the top of the theatre curtain, there is a translation (even though this performance was in English, it’s still hard to pick out every word through the big warbles) which means you don’t lose track of what’s happening. The singing was utterly incredible once you get past the absurdity of people singing odd things such as ‘my husband is leaving, I must go with him’. It took me about 20 minutes for it not to sound silly any more, but once you’re over it, you’re in. I checked out prices for performance – no more than any standard theatre price, much to my surprise.

Opera singers don’t use microphones so in a way, they’re vocal athletes – they defy possibility really with such intense performance over a prolonged period of time. If I spoke for three hours more or less non-stop, I’d have no voice, never mind sing. I remember reading a celebrity quote (might have been Sarah Jessica Parker) about crying all through the opera, and thinking it was pretentious – I was blinking back tears through the arias because the intensity and volume of the vocal agility raises the hairs on the back of your neck. I would (and will) go again in a shot. If you’re going for the first time, pick wisely (Puccini, Verdi, Rossini maybe) – there are some operas that don’t have any arias – they’re purely recitative and if you’ve gone by accident for a 4 hour session of that you might well want to chuck yourself off the balcony. Some good pointers for a first opera are HERE.

The ENO is HERE.