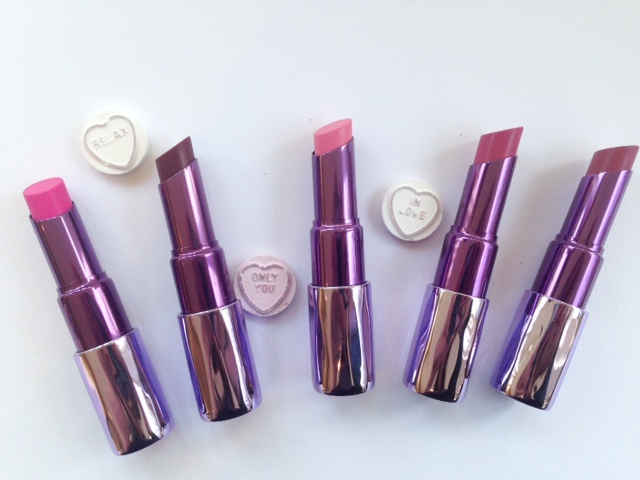 If ever a lipstick was made 100% for my preferences, this is it. Urban Decay Sheer Revolution Lipstick is a dream and I just don’t have one single negative thing to say. The premise of Urban Decay Sheer Revolution Lipstick is to be, I think, a bridge between gloss and lipstick and is the ‘lite’ version of their Revolution Lipsticks. So, formula-wise, it’s heavy on sheen but full on pigment in a sheer way. There’s no big smack of colour; instead, a colour infused wash that gives lips a hue, but in the softest, most succulent way. And, it stays on a great deal longer than any gloss I know.

Swatch wise, from bottom to top, we have: Sheer Anarchy, Sheer Shame, Sheer Obsessed, Sheer Ladyflower and Sheer Rapture. It’s kind of self explanatory from the swatch that you get some tranlucency but also a good amount of colour.

These are the kind of every day lipsticks you can just chuck in your bag and wear whenever, for whatever.

They don’t look that even in the swatch, but I can promise that this doesn’t translate to the lip. I’ve already worn several shades – I’m quite shy of very strong colours, and there isn’t one here that I don’t think is wearable on the basis that the colour is definitely there, but as more of a gesture than a statement. So, from bottom to top: Sheer Slowburn, Sheer F-Bomb, Sheer Liar, Sheer Streak and Sheer Walk of Shame.

Urban Decay Sheer Revolution Lipstick are very soft on the lip but not as thick as a balm – it’s just a very clever hybrid, this one and definitely worth grabbing because it’s truly a can’t-go-wrong product. They’re £15.50 (why we’re paying 50p more I don’t know for less pigment when the regular Revolutions are £15) HERE.