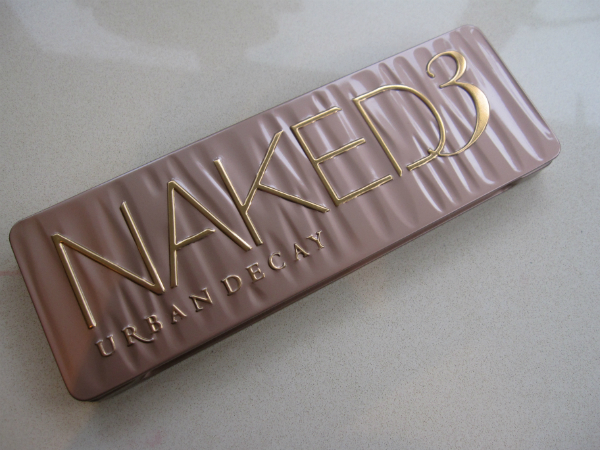 Yes, Urban Decay Naked 3 really does exist! There has been a lot of on-line speculation about whether this was the real deal or not, so I can confirm once and for all that it is indeed the third palette in the Naked series.

I’ve had to make a judgement call on whether to post these pics – I lost most of my day to a series of launches so the light is not the best for the palette – they’re taken in low day light, but looking at them they are quite true to the shades so I will do a series of bright day light swatches later. I didn’t want to stick it under artificial light because it skews the shades so much, but hoping for a sunny day tomorrow!

The first six have a rose cast to them – they’re all neutrals, but most err to pink-neutral.

The first six are in quite a stark contrast to the second six in terms of pigment – they really are quite light – and I used one stroke of a brush for all these swatches so you can see the difference in the first half of the palette to the second. They’re all smooth and buildable, except, strangely, Dust, which is the only shade I had to go over more than once to get a decent colour pay off.

So, a closer look at the darker half of the palette – I’m so surprised at just how much colour contrast there is compared to the first half. However, it is a very versatile palette and I think I like it best of all the Nakeds because it errs to pink-neutral which anyone can wear.

It’s also got a good mix of sheens, mattes and sparkle. There’s always going to be the question of whether you need 3 if you have 1 and 2. Well, need is subjective, right?! But, I do think there are enough differentials that if you are a nude palette fan, you’re probably going to love it!

So, what you need to know. It’s £37 and launches in December (16th is a preliminary date tbc) and will be on sale at House of Fraser and Debenhams. There are more (daylight) swatches HERE.