The Not-So-Sparkly Side To Glitter In Make-Up 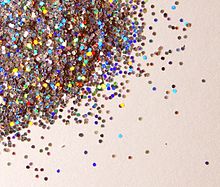 A few weeks, a reader wrote to me saying she was concerned about the environmental aspect of glitter in beauty products. It had genuinely never occurred to me that there was an impact from plastic glitter on the environment. So, I asked her if she would mind doing a bit of research and write a guest post on the subject, and she did, so many thanks to Catherine Flutsch for this post. It’s a timely call-out for beauty brands – we really can’t do without glitter in beauty world so quit being so tight and start using it responsibly.

“One day, while I was browsing the user reviews for a glittery bath bomb, a comment caught my eye.  A marine biologist had written about the damaging effects of glitter in the ocean.  I’d never considered that anything I put in water that’s too small to be filtered out, will eventually end up in the ocean.  Plastic in the ocean physically breaks down into smaller and smaller pieces. Scientists have shown that filter feeding animals easily ingest these tiny pieces of plastic.  As soon as that happens, the plastic particles and any chemicals in them are in our food chain.

I stopped using glittery bath bombs the day that I read the marine biologist’s comment.  But I did miss the brilliant sparkle on the many grey, wet days we had last year.  So much plastic is already in our oceans (around 300,000 bits per sq km at last count), surely my teeny, glittery bath bomb wouldn’t make any difference?

The more I’ve read about this issue, the more angry I’ve become with the cosmetics companies. They are all very well aware of the issue but, like so many other inconveniences, seem to be trying to keep it quiet from consumers or explain it away.  There are alternatives to using glitter in beauty products that are available right now – edible glitters used in cake decorating for one.  But guess what? They’re a bit more expensive than using cheap bits of plastic.  Finely ground up coconut husk is a brilliant, biodegradable way to exfoliate but once again, it’s more expensive.

If you care about this issue, the best way to do something about it is to stop buying products containing bits of plastic that will end up in water.  Even better, politely tell the companies. Eventually, the message does get heard by the people who are making the decisions.

Occasionally, you might be pleasantly surprised.  I mentioned to a sales person at Lush that I would not buy a glittery bath bomb because of the plastics issue.  Instead of looking at me as though I were mad (like most other cosmetics sales people do when I mention this) she apologised for the glitter and then pointed out all the products that contained environmentally friendly sparkly alternatives.  She also mentioned that Lush’s aim is to phase out all glitter soon.  Kudos to Lush for educating their sales force on this issue and for proactively doing something about it!”