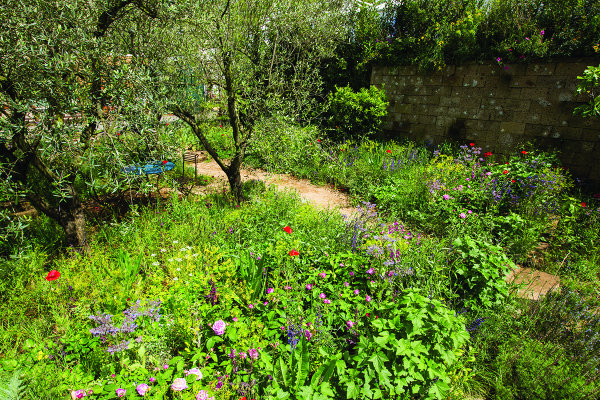 I popped over to the Chelsea Flower Show this morning because L’Occitane have their own garden again (they scooped a gold medal in 2012 with their Corsican garden full of Immortelle flowers). It was absolutely pouring down with rain – and so chilly – and yet somehow there was still a sunshine feel to it. I made a Periscope of the garden where you can see everything much better (follow me at Britishbeautyblogger) and because of that, got very distracted and forgot to take any pictures of it myself.  The garden brings to life the sights and scents of Grasse, so there were lots of fragrant herbs as well as flowers that feature in many of the familiar L’Occitane fragrances, such as fig (two fig trees!), iris, osmanthus, lavender and thyme. One of the most interesting things is that they had flowering poppies – poppies should not be flowering right now and I’m told there is a rare skill in being able to bring flowers to bloom out of season. Although it was so chilly, I’m surprised that they hadn’t all folded up again in protest.

While I was there, so were some bees! I think there is a prize for most bee friendly garden at the RHS Chelsea Flower Show but I strongly suspected that someone from L’Occitane’s sister brand, honey based Melvita, was bee bombing (not really)! The garden is designed by James Basson, and I wish L’Occitane all the luck in securing a medal again… the attention to detail, from the tiny ferns and mosses planted around cracks in the walls, to the wash-pool and thyme hedge (washer women would lay out the clean laundry over the thyme to dry so that it was infused with the fragrance) – so pretty.

I ended up staying and Periscoping far longer than intended. Inside the tent there was a 150 years of Alice In Wonderland theme going on – that’s a subject that was clearly a joy for talented florists so I’m popping in a couple of pics just so you can see! I know that there’s coverage on BBC on the show so I’m hoping that some of these creations make an appearance.

Obviously, everything has to use real, fresh flowers.. I can’t imagine the stress of trying to keep these displays in tip top condition. Oh, and the Thailand garden with flower elephants.. (on Periscope) – and some very moving charity gardens. If you don’t have tickets, it’s definitely worth tuning in for a watch because it seems to be a very creative year for the Chelsea Flower Show.