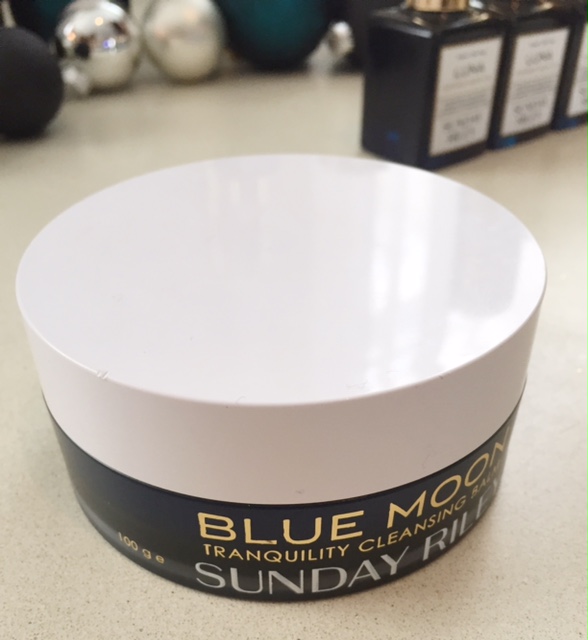 I know that everyone raves and raves about Sunday Riley – I first tried it out in 2012 – but I do cringe a bit at the prices. It’s such an expensive range. However, people don’t get obsessed with brands for no good reason, and I enjoyed using Flora Face Oil, so when I came across Sunday Riley Blue Moon Cleansing Balm yesterday, I can say it’s the first SR product that I’ve felt I must try. And yes, it’s blue! I know that Sunday Riley fans will be longing to get their hands on this even at £85 (ouch!!). Rather excitingly, when I saw it yesterday (see main picture) it was the only sample in the UK and had arrived at the press day literally moments earlier… so as yet, I haven’t had a chance to try it. This is more of a head’s up for Sunday Riley fans to make a note of. I am kicking myself for not taking more pictures, given it’s preciousness, but it’s nice to be able to show BBB readers something so hot from transit!

I can tell you a little more about the Sunday Riley Sleeping Night Oil – described as the next generation retinol, and yes, this is also blue, thanks to Azulene which also helps to reduce any inflammation that might be caused by retinol. Sleeping Night Oil also contains grape seed oils, chia and cold pressed avocado, but the thing to be excited about is the trans-retinoid acid ester. I’m actually talking myself into wanting to try this as well! Retinols are known to among the few ingredients that can really make a difference to the complexion (in terms of anti-ageing) but they’re claiming a reduction in pore size whereas I had always thought that they can only really reduce the look of size and give them a good unclogging.

Anyway, I think we are set for a 4th October (SpaceNK) launch for the Sunday Riley Blue Moon Cleansing Balm but the Sleeping Night Oil, which is £85 is out now HERE.