Bobbi Brown Brightening Gloss
It’s no secret that the key to BBB happiness is a Bobbi Brown gloss, but I was initially sceptical when told that Brightening Lip Gloss would make my lips look fuller and brighter. As part of the Make Up Face Lift look, two new shades, Popsicle and Nectar are already on counter. I tried Popsicle, a sheer pink. On application I applied a regular gloss to my top lip and Popsicle to the bottom lip…and yes, there’s a subtle but noticable difference. The sheen on Brightening Gloss is far more reflective, giving a a dewy lip look that is definitely brightening. Impressed. 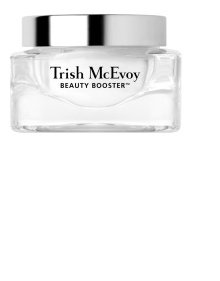 Trish McEvoy Beauty Booster
I’ve literally just wiped this from my face and it gives a very softening effect to the skin as well as completely oblitorating the dry patches on my forehead. It can be used as a skin primer before make up – I did exactly that this morning for a cushioning effect under foundation – or as a longer lasting boosting mask. As I’ve tried using it both ways, I’d say it is best as a mask because the benefits are more obvious. Beauty Booster is a great primer, but I’m not sure it gave anything over and above others, but as mask, nobody could be disappointed. To have the best of both worlds, I’d use it as a pre-make up mask, thus requiring no primer, for smoothed and silky skin that foundation loves to sit on. £57, at Harvey Nichols and Selfridges. 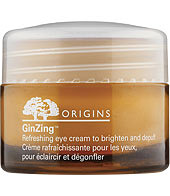 Origins GinZing Eye Cream
Beauty world is buzzing with news of this cream, said to outclass virtually all others. Billed as ‘a refreshing eye cream to brighten and depuff’, I found that so far, it brightens better than it depuffs. It is jam packed with illuminating brighteners and hits the spot by reflecting light rather than relying on colour to conceal darkness. Maybe I have to use it for longer to see a real puff-decrease but I still see slight signs of swelling below the eye. Longer term promises are to improve micro circulation under the eye area and strengthening of capilliaries to reduce dark circles. It really does make the eye area look brighter though, and doesn’t sit in a miserable pool of ever-more-drying pigment as concealers often do. For a reasonable £20, it’s better than most.