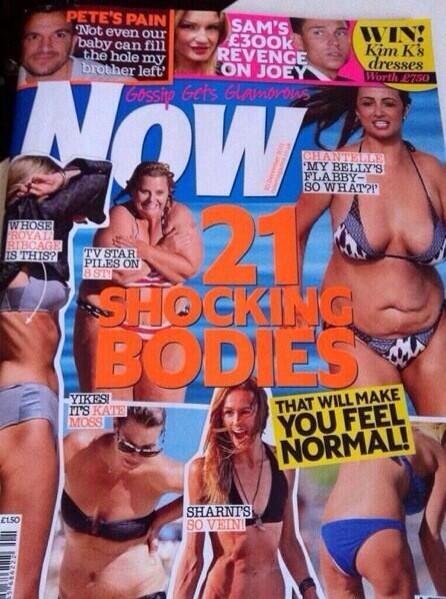 Shocking bodies? Shocking lack of thought, more like. This is the front cover of NOW Magazine (owned by IPC) who hopefully by now are feeling rather ashamed of themselves. I’ve been watching Twitter this morning and this picture keeps on popping up – obviously it’s provoked a reaction and none of it’s good.

Whether you think these bodies are shocking or not, I don’t think it’s okay by any measure for a magazine that is predominantly aimed at women to be using what they deem as ‘less than perfect’ bodies as a front cover (or any page for that matter) for us to pore over in revulsion. This issue is huge – it’s way bigger than I can cover here – but the bottom line of this is that it is a horrific example of why women suffer more than ever from body confidence issues. Do these make me feel normal? Do they make any of us feel normal? What even is normal when it comes to body shape anyway? Normal is an awful word when it comes to describing people – and especially when it comes to body shape. What NOW have done is make a mockery of women who are either ‘fat’ or ‘skinny’ and asked us to become judge and jury of them, too. My feelings on body size are totally my own… I neither want to be over or under-weight personally, but that’s pretty much irrelevant..what counts here is that this picture just heaps misery on those who perceive themselves to be less than ideal and at a guess, that’s just about all of us.

The thing that strikes me is that all of these women look happy – they’re all smiling, all caught unawares on the camera so they aren’t smiling for the (no doubt hidden) camera. They’re all on holiday enjoying the beach just like millions of us do. Now, that’s normal. So, who are we to judge what size they should or shouldn’t be? NOW magazine have done the women’s magazine industry the most enormous disservice here – I know many magazines are trying to move away from the size 0 model images and bring a dose of reality into their pages and something like this is beyond unhelpful to an industry that’s desperately trying to stay alive. It’s also beyond unhelpful to anyone with a body.

The NOW editor is responsible for allowing this hateful page to go to press. If, as an editor, you make a judgement that filling your front cover with ‘abnormal’ women for readers to mock and revile, and you feel that’s okay, then your judgement has to be totally questioned. This picture says so much more about the editor’s attitude to women, celebrities or not, than it does about the women themselves. It also screams ‘desperate for readers’, which most magazines are, but bad call NOW, really, really bad call.