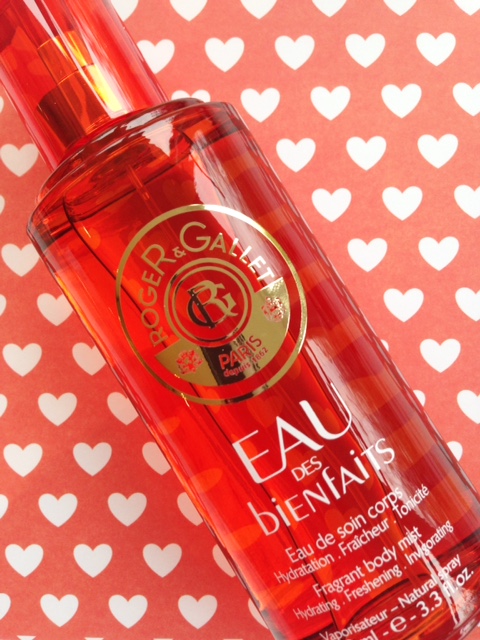 So, can a fragrance make you feel all hearts when previously you were feeling all daggers? This is such a stressy time of year when we’re supposed to be all jolly but can’t quite find the joll thanks to so much to cram into before the deadline. Every year I promise myself that I’m going to try and actively enjoy the run up to Christmas, enjoy the present buying, the wrapping, the card writing, but every year it feels like more of a pressure. I think we should move the social festivities to January – that would help. Or maybe I should just crack open the Bailey’s a bit early.. is 10.30am too early?

So, the Roger & Gallet Mood Boosting Fragrance, Eau de Bienfais, has a bit of science to back up its mood boost claims. I’m laughing a bit because testers were subjected to mild stress (but it doesn’t say what – I’d love to know!) and some were spritzed with Eau de Bienfais every day for 14 days. Those wearing the fragrance had lower levels of stress (the test used is the Stroop test). It’s interesting really – I bet it was tested on French women, who I can imagine might have ‘mild stress’ because it’s somehow far more elegant that being ‘stressed off your head’ which is how we Brits tend to term it. I’ve never met anyone who complains of mild stress!

That said, it can’t be dismissed out of hand that an olfactory trigger might well be a calming influence, and the actual fragrance is lovely – a sort of mild orange and lemon, both of which are well known in aromatherapy for being ‘happy’ triggers.

I love the idea of this – even if it has some kind of psychological effect only, then it’s job done. It might save you from the extra bottle of Bailey’s.

You can find Eau de Bienfais for £28 HERE.