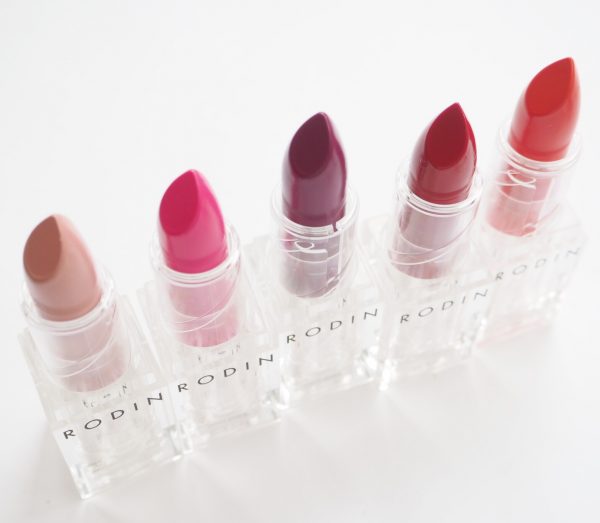 I’m not exaggerating when I say that Linda Rodin’s Olio Lusso became a cult hit virtually over-night. Those in the know never look back once they’ve tried the essential oil elixir, and bearing in mind that the company has only existed since 2007 and it’s already been snapped up by Lauder, there might well be something in it! So, it seems a natural next step that lipstick appears in the line-up, especially given the Lauder connection.

The formula obviously includes the Olio Lusso complex which makes for nourishing feeling lipsticks that are very creamy on the lip with a light sheen. The pigment is good, and with the exception of the lightest colour, So Mod, they’re bright! It’s a standard requirement of a bright lipstick that they stay put – these are so creamy they feel almost balmy and I have found them to be good stayers. I tested So Mod and the orange shade, Tough Tomato, and So Mod stayed better for some reason.

From bottom to top: So Mod, Winks, Billie on The Bike, Red Hedy and Tough Tomato. They’re launching into Liberty later this month for £28. For some reason I thought they’d be more expensive than that – I know it IS expensive, but in my head I thought they’d be pushing £30.