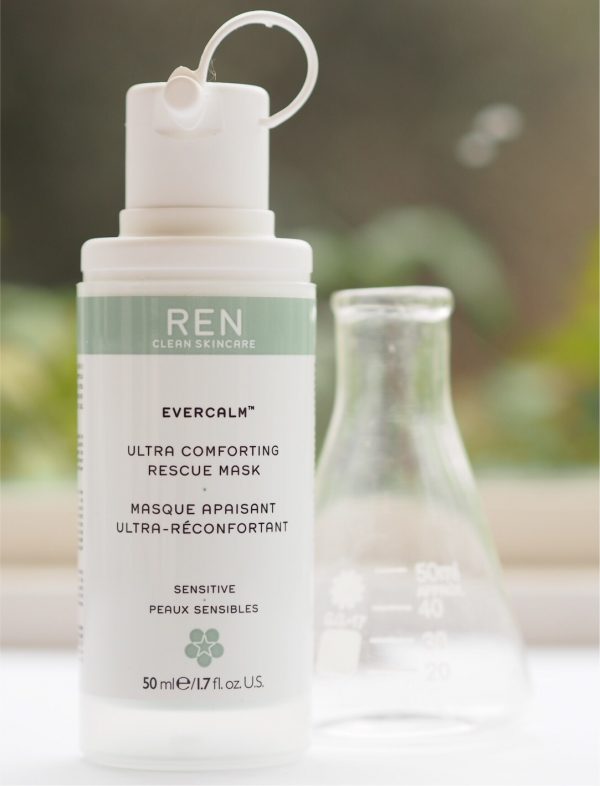 A couple of years ago, ‘sensitive’ skin care products represented a quarter of new US skin care launches, according to Mintel. I’m sure I read somewhere that many people think they have sensitive skin when in fact, they haven’t, and they’re just playing ‘safe’. Although there is no hard and fast dermatological definition for sensitive skin, it can be defined as over-reactive skin that behaves differently according to physical, environmental and lifestyle factors. It can manifest in many ways, but mainly skin can feel itchy, dry and burn or look blotchy and irritated when something stresses it. Opting for ‘hypoallergenic’ products isn’t necessarily the best option because all that simply means is that a product is less likely to cause a reaction but it’s not a well regulated term and is widely regarded amongst skin experts as meaningless.

REN’s new Evercalm Ultra Comforting Rescue Mask treats key symptoms of sensitive skin, but also break the stress cycle so that skin can begin to repair rapidly. REN are claiming a connection between mind and sensitive skin. It’s not quite the psychodermatology arena but more a blocking of pain and irritation signals from the skin to the brain. Wow – this is amazing! All from mushrooms as well. I am the biggest, biggest cynic when it comes to skincare claims – I know how to dissemble a press release to separate fact from wishful thinking and what I think REN are saying is that the feeling of skin soothing makes the brain think all is well so it doesn’t send signals to react. So, it’s not quite a miracle, but a simple process advanced by the correct ingredients.

Speaking of, key players are white mushroom extract (albatrellus ovinus), magnesium carboxymethyl beta glucan (found in baker’s yeast) and arnica. The white mushroom is a natural pain killer that blocks mediators for pain and itching and also gives an analgesic effect. The yeast compound is antihistamine and antibacterial and we all know that arnica is a hero for soothing and reducing inflammation.

I’m not normally this interested in skin care – much of it is so swamped in hype I genuinely can’t pull fact from fiction – but my gut feeling is that REN Evercalm Ultra Comforting Rescue Mask  is set to be awesome. I don’t have sensitive skin so I’ll say from the get-go that I haven’t tried it – it’s a pointless exercise if there is nothing to calm. I’m looking forward to reading reviews though from bloggers with sensitivities when it’s released in January. A definite ‘watch this space’.