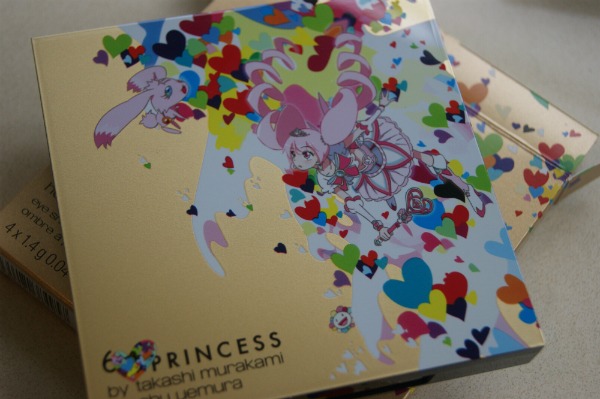 If you don’t have a reference point for Takashi Murakami, you might remember when Tate Modern did their Pop Life exhibition which was quite widely covered. Takashi Murakami’s video of Kirsten Dunst in Japan was doing the rounds..

Takashi is a major player in contemporary Japanese art so he is the perfect choice for Shu Uemura, also Japanese. The palettes reference an upcoming film by Takashi (6HP – Six Hearts Princess) which is almost certainly going to be off the wall! Since Japan is such an influence in beauty world right now, I think the beautiful little cartoon illustrations will resonate with everyone.

My first impression of the palette is that the pans are set wonky and it’s infuriating! But, I went into major forgiveness mode after swatching.

The luminosity on the shadows is insane.. they literally light up your eyes and with the softest formula ever.

They’re an absolute delight to apply and I really can’t think of the last time I even said that.

Again, the setting is wonky as you can see… but..

The shades are so multi-faceted and well.. lightful.. if that is even a word.

I was trying to decide which I’d opt for if I was at the counter – they’re £60 a pop so rather an out-lay – and I really can’t choose.. I’d pretty much wear all of both.

So, the news is that if you want to be the early bird for what is after all their Christmas offering, is that Selfridges will be stocking these as an exclusive from 10th October. There are other products that I will blog at a later date, including the Six Heart Princess Make-Up Box Mini.. a snip at £375! Eek.. whatever is in it?