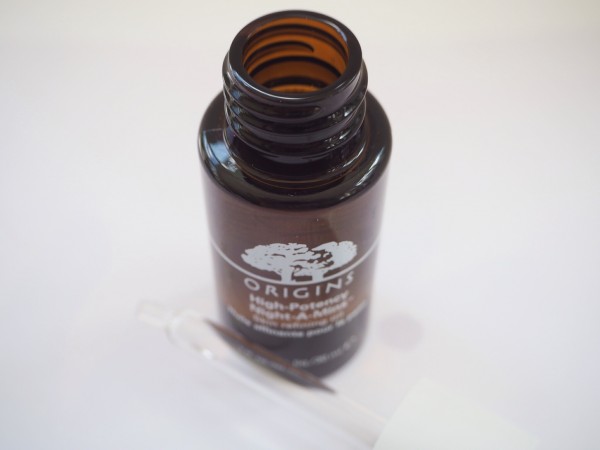 The Estee Lauder group product ranges haven’t really focussed on oils, and it looks like there’s a bit of an oil thing going on right now. First, Clinique’s Turnaround Revitalizing Treatment Oil (lovely by the way) and now Origins High Potency Night-A-Mins Skin Refining Oil – aka the Origins Sleeping Peel. It’s a refining oil – made to gently exfoliate your skin at night so you wake to a glorious glow. Or at least, brighter looking skin. Anything that brightens mornings is good with me!

In texture, if you’ve tried the Clinique oil, it’s very similar. Lauder are owning the non-oily oils right now and so the feel of it is great for anyone who doesn’t like the weighty feel of some oils. It’s somehow silky and yet not greasy. Ingredient wise, there’s white willow bark, sage, cranberry seed and pomegranate. What sets it aside from the Clinique version most obviously is the scent – neroli, valerian and vanilla to put you in the sleepy mood.

I’ve only had one go at the Origins Sleeping Peel but the scent is beautiful – not overpowering and for a change, not lavender soaked as most ‘sleeping’ stuff is. That’s a real plus point for those who don’t like lavender.