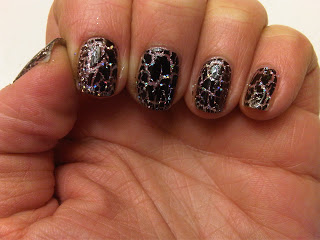 I was so sure I wouldn’t like this range that launches in January, but in fact, it turned out quite the opposite. I’ve seen crackle effect nail polishes before and didn’t like them all that much mainly because I’m not mad about matt effect polishes. So, using the super sparkly pink Teenage Dream polish as a base (it needed two coats at least), I applied OPI Black Shatter over the top, and then over the top of that, I applied the very shiny Lumos High Speed Top Coat to give a glossed effect and get rid of the flatness of the matt black. Black Shatter disperses extremely effectively over the nail – it’s a little bit difficult at first to judge the amount you need to get the right look – too little and it shatters into tiny fragments, too much and it’s a little bit chunky, so I’d suggest you practice a couple of times first to get the effect you like. The other colours in the KP range aren’t quite so sparkly – Last Friday Night isa bright blue sparkle, but for some reason doesn’t shimmer as much as the pink Teenage Dream and I think you do need a mega-sparkle behind the black. Anyway, here are the results, which, despite reservations, I absolutely love!