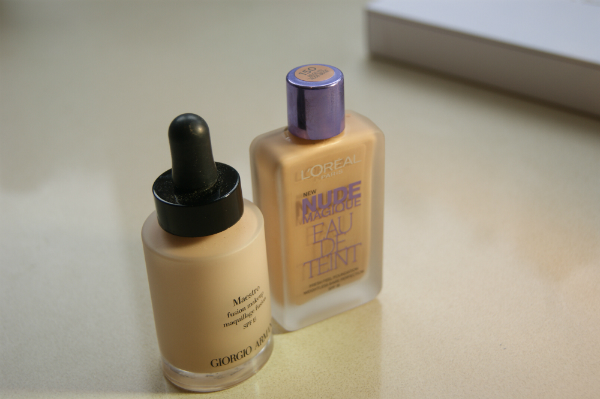 A reader asked yesterday whether the two, Armani Maestro and Eau de Teint could be compared. Indeed they could! In fact, I would lay money on it that it’s the same formulation.

Without an ingredient list of both (although luckily I have both products, but clearly, not the same shades) it’s impossible to be 100% sure but having got both on my face today (only for my dog walk – I can’t go to work in two different colour foundations!) they feel exactly the same on the skin. Their texture is identical in as far as I can tell.

I know that ‘cascading’, as its known, is common practice – to allow prestige brands within the same umbrella group (i.e. L’Oreal) launch first and then let the formula filter down to the high street versions. I think this is a classic example.

The question is, did we pay vastly too much for Armani Maestro (£38), or is Nude Magique Eau de Teint (£9.99) – the ultimate Fauxmani – the bargain of the century?

I know that Eau de Teint is filtering onto Boots shelves, and a reader has just spotted it on FeelUnique (HERE) for normal £9.99 and free postage.. GO!