My New Nail Crush: Deborah Lippmann Glitter In The Air 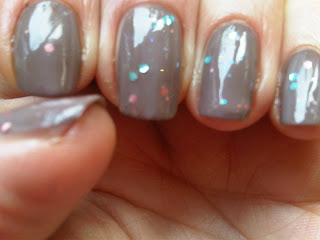 I’ve been eyeing up this bottle of polish with suspicion since I got it a couple of weeks ago, but now I’ve tried it – wow! I love the result. I’ve put it over CND Sophia from the Jason Wu range and was worried because the multi-coloured chunky sparkles are set in a milky polish that looks pale blue in the bottle. On unpolished nails, it is almost invisible and the glitter looks beautifully sparkling. 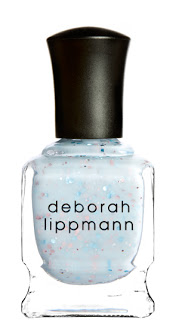 The sparkle comes in blue and pink in varying size circles and settles randomly. I wasn’t sure what to put it over because the milkiness could deaden a really vibrant shade, but it looks like Sophia was exactly right. However, it did take a bit of practice to ensure the brush was fully loaded with glitter and I had to redo a couple of nails because any more than one coat of glitter over the brown does leave a milky overcoat.

Glitter In The Air hasn’t quite launched here yet (in House of Fraser) but I’ll flag it up when it does.