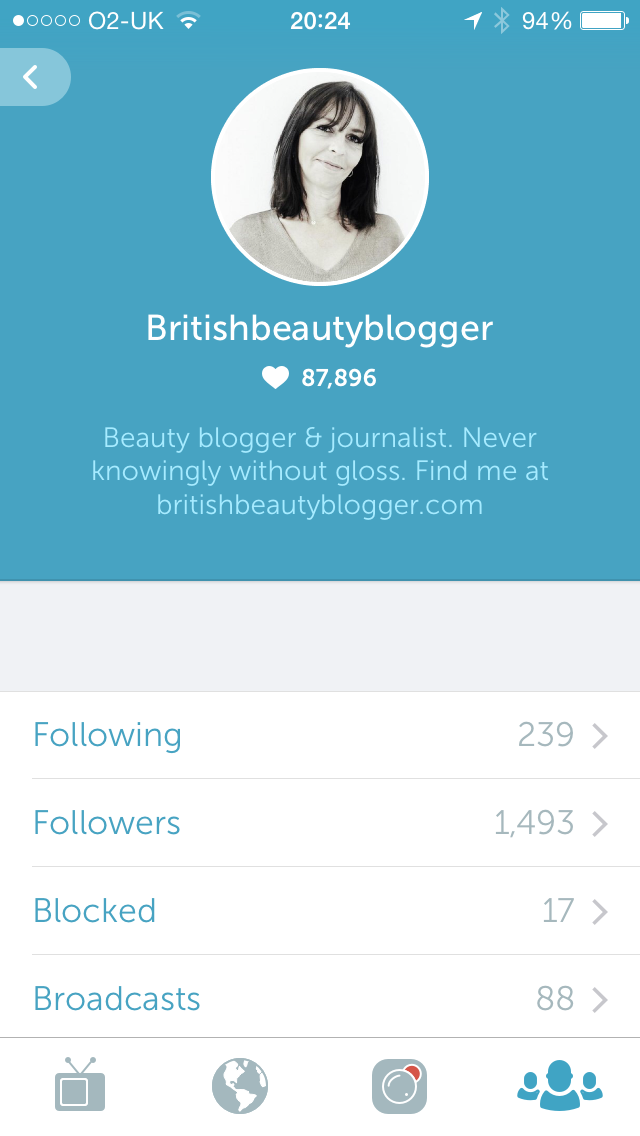 Personally, I like to follow a variety of broadcasters covering different topics, but I’ve locked down what I don’t like, which is helping me to streamline my own Periscope channel better.

First:  I don’t like expert marketing accounts that promise to help you get more followers. It takes them about 20 minutes to give one tip and so far, the tips are nothing I couldn’t have worked out for myself. There are no ‘secrets’ to getting new followers – it’s just a question of putting out good content, linking it to Twitter, and gently encouraging people to give you a follow if they want to. I followed a lot of these ‘how to get amazingness on Periscope’ accounts initially but have unfollowed most now.

Second: I’ve realised that I’m not interested in Sascha Pallenberg, wherever he is in the world.

Third: Periscope ‘gurus’ – again, despite the promise that they’re going to give ‘tips’, invariably, it’s a game of chase-the-followers for themselves, and it takes nearly forever to get any kind of tip.

Fourth: Staying on topic is also key – I follow some very wise social media people who give very good information and advice and I take them seriously as professionals, but I definitely don’t want to see then them at the church barbecue in their bikinis (or Speedos!). Always narrate your scopes.. I click away from silent scopes almost straight away.

Fifth: Don’t Periscope after too much wine. Seen a few horrors already and it’s just awkward and embarrassing.

So, learnings are: stay on topic, don’t do drunken scopes, celebrity scopers aren’t that interesting unless you’re genuinely a fan, and don’t fall for marketing scopes when they never do offer up anything useful but instead gather new followers for themselves.

Periscope is like Twitter was in its infancy – it’s neatly dividing into content creators and content viewers. For those of us newly creating, it’s hugely encouraging to get support from those who just want to watch but not create. Periscope uses a heart system that you can show that you’re enjoying the scope by tapping the screen, and these count as kind of ‘likes’. I’d prefer if it was thumbs up or something, rather than hearts, but it is what it is right now. Just as on Twitter, there are lurkers (usually brands!) who never join in or like or.. well, anything. Periscope doesn’t tell you who left your scope after how long (you can see numbers rise and fall however, but not specific people), but it does show up how many hearts you left – if any.

If you want to get traction on Periscope, try and buddy up (I buddy up with Hayley at LBQ) with your blog or Twitter friends – you share out their scopes and they share yours. We also encourage our followers to also follow each other. It’s just a nice and friendly way to help each other along and because we scope on similar subjects, it’s likely that our followers will be interested. There’s an option to share with other scopers, so I try to use that, but use it where it’s relevant – I know I have followers who want to see beauty so I’m less likely to share out something that is entirely unrelated.

I’ve bought an iPhone holder from Amazon very cheaply (make sure it holds your phone both landscape and portrait) and it’s so useful – you can’t really swatch make-up with one hand!

Think really hard about your topics – your ‘thing’ might be a variety of topics, which is fine, but my feeling is that Periscope will divide into interests rather than just the scatter approach that there is now (interestingly, it’s been grabbed by estate agents for example – more in the US so far – to do house viewings.. good idea!). I know someone who does a little scope from her balcony in Paris every morning, another who does amazing London views, someone who reads a story at lunchtime, another who feeds hummingbirds.. so the topics are endless. Scopers I’ve moved away from are the ones who scope the minutae of their lives – I don’t know why, but I’m not interested really in watching someone do their shopping or having their dinner! It’s not Instagram, where a picture of either would be good to look at.

So, even though it’s still so much in its infancy, Periscope users and viewers are settling down to being more on point – I’m sticking to beauty, on the whole, but where I get most engagement is when I’m talking on the subject of beauty, blogging and social media. And, I feel I can be far more open and frank on Periscope because it disappears after 24 hours than I can on my blog or other channels. I think the temporary nature of it makes me braver! The scope I did on Native Content had the most viewers and likes ever. So, basically, now I know to do more of that kind of scope. Learning from your followers is absolutely vital. The founder of Periscope said very recently that Periscope is a platform for truth, and I honestly think that’s the case – when you’re speaking live, to camera, one way or another, people will see the truth.

You can find me on the Periscope app at Britishbeautyblogger in search.