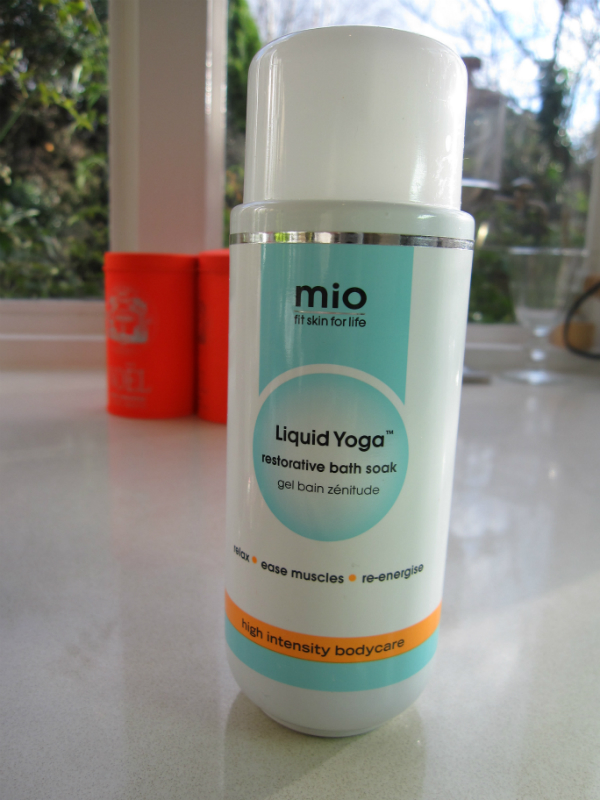 Mio Liquid Yoga hands down gets the best named product of the year prize! Liquid Yoga – I love it. Described as a restorative bath soak, it’s the bathing equivalent of sucking an extra-strong mint. I totally get that it can give you a complete mind-sweep because it’s bracing and embracing at the same time.

The formula contains liquid Epsom salts of which I’m a big fan of for easing away aches and pains – it really does seem to do the trick, so those, along with a slug of Arnica take care of achy bits. Obviously, you could just use straight Epsom salts (from any chemist) but then you wouldn’t get the yoga bit – a huge slug of spearmint, cypress, lavender, mandarin and chamomile. Mio Liquid Yoga also contains Murumuru Butter so skin doesn’t feel tight when you get out of the water. It’s £26 for a 200ml bottle, so personally, it’s priced at ‘treat’ level, but oh, what a treat.

The only thing I’m not really sold on is the ‘slimming’ element of Mio – with this range, it’s disguised more as ‘fitness’ thing, but a waist slimming lotion and bust firmer are reinforcers of poor body image and putting cream on the bits you aren’t happy with is a bit like sticking a plaster on a cut – it won’t cure the cut or the cause, but it will make you feel like you’ve done something about it.

There is something very weird about the bottle though – it doesn’ t want to photograph straight and just when I was really berating myself for being a bit rubbish at pictures (which I am), I notice it’s also a little skew-wiff on the SpaceNK website. You can find it HERE.